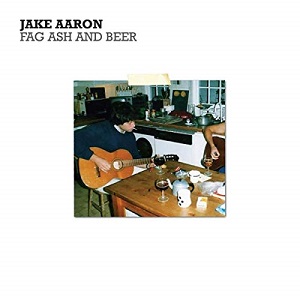 
Jake Aaron is a British guitarist, singer-songwriter who appeared to have been ploughing his musical furrow for some years before his first EP release in 2016. This record was very well received, as was 2018's follow up instrumental single, the marvellously titled 'Give Me Your Horse'. This eclectic approach has been broadened with the eleven tracks on Jakes first full album release, 'Fag Ash And Beer' as the songs range across folk, Americana, jazz, instrumental and lyrical offerings, all with the unifying factor of being penned by Jake. Some of the tracks are sparse, guitar or guitar and voice, others are built up and layered using the talents of keyboard maestro Steve Lodder, bass from Davide Mantovani and Guy Pratt, drums and percussion Marc Parnell and trumpet, Steve Waterman.

Opening track, the instrumental 'Elvis Has Left The Building' gallops in on a trademark 'Elvis' style acoustic riff but stretches out with great drums, bumping bass and keyboard fills and swirls and is the first of many tracks that would fit perfectly over the opening credits of some sprawling American road movie.

Title track 'Fag Ash And Beer' has another strong guitar part before Jakes world weary vocal enters with the evocative opening line "The Moon rolls back and it's right on time tonight". He has a smart way with a lyric and a very distinctive voice and delivery, half sung, half spoken, sitting somewhere between Lou Reed and Lloyd Cole.

'For B' is a largely acoustic guitar instrumental that's in and out in one minute twenty five seconds, the deceptively jaunty music of 'Morning Town' belies the darker lyrics before the classical stylings of guitar piece 'Allegro' bring us on the stately paced, Dylanesque musings of 'Genevieve Alright'.

Track seven 'Also' is so short as almost to be an instrumental prelude to another rolling lyrical offering, the aptly titled 'Jonah Part 1' which also serves as a prelude to the albums last three numbers, all of which are instrumentals. Firstly, the jazzy 'Late Night Radio' that could almost be the song that nearly became the sound track of 'Frazier', then the sparse atmospherics of 'New Mexico' with a bass line that suggests any minute it's going to morph into 'All Along The Watchtower' before the gloriously bonkers cinematics of 'Give Me Your Horse' ends things up and brings us right back to the world of songs that will end up in a Quentin Tarantino movie at some point in the future!

Interesting, almost idiosyncratic album this, not least when a writer so adroit with words fills the record with instrumentals. That's not a criticism of the instrumentals, I liked them a lot, just that I liked his lyrical songs as much and would have liked to hear more of them.

Once heard, Jake Aaron isn't an artist to be forgotten and 'Fag Ash And Beer' will further cement his growing reputation.