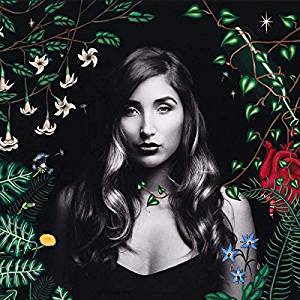 
'Wilderness' is US singer-songwriter Jade Jackson's follow up to her 2017 debut album, the well received 'Gilded'. With the artist being likened to Lucinda Williams and Emmylou Harris, the songs on 'Wilderness' take a much more personal, autobiographical perspective than the generally observational tone of her first record. To add some context, just after her 20th birthday Jade had a nasty accident which required an extensive and ongoing period of rehabilitation that also precipitated a struggle with prescription pain killers and an eating disorder over the next few years. This collection of songs resonates with these struggles and we are told it is "A powerhouse of a record about the in-betweens and stepping-stones we dwell in and leap across while coming to terms with our sense of self, and how melancholy can be a powerful weapon to wield - especially in the form of a roots-rock or country song".

As far as I am aware, all twelve tracks are Jade Jackson originals and the album is again produced by the Social Distortion punk rock legend Mike Ness who has been involved with Jade's career for sometime now. It was hard to find the band details in the promotional material, but according to Jade's website Mike Ness's son Julian plays lead guitar and long time collaborators Tyler Miller and Jake Vukovich supply drums and bass respectively. However, there is also extra instrumentation, steel guitar, keyboards and so on, but it is not obvious who was responsible for these parts.

Opening track 'Bottle It Up' swaggers in on riffy electric guitar, sharp drums and bumping bass and doesn't take long to get to the hooky chorus assuredly delivered by Jade. She has a very distinctive voice, sitting somewhere between a huskier Natalie Merchant and a less strident Debbie Harry.

'City Lights' is equally as exuberant with its bass line intro and rattles through in a breathless three minutes twenty seconds, whilst the twangy, guitar driven 'Don't Say That You Love Me' completes an opening trio salvo of defiantly 'in your face' songs.

Track four, 'Multiple Choice', slows things a little with its stately acoustic strum and courtly keyboard underpinning and boasts a particularly fine vocal from Jade, but any reverie is quickly broken with the heavy bass and crunchy guitar riff of the indie-pop textured 'Now Or Never' before the sweetly picked, breathily delivered 'Tonight'.

This ushers in a reflective period of the album with the wonderfully evocative 'Dust', the modern country balladeering of 'The Long Way Home' and the wistfulness of 'Loneliness', until title track 'Wilderness' barges in, all electric guitars and drums blazing with Jade's laconic vocals floating over the top.

The album draws to a close with the nimble acoustic guitar of 'Shiver' which features my favourite vocal on the album from Jade as she tells us "I thought I was tough enough so I took my turn, In the warmth of the sunshine I got burned" and then last track 'Secret' ends things on a gloriously defiant note with brash electric guitars, bass and drums firing on all cylinders.

I must admit that when I read the background to this album where much is made of Jade's personal struggles and difficulties, I was a little concerned it may end up being a worthy but ultimately dour listen. Well, luckily I couldn't have been more wrong! The songs are generically strong and the band playing is universally excellent, all of which is topped off by Jade Jackson's fine voice. However, what really pulls this album together as a great listen is the production by Mike Ness where his rock leanings bring a real punch, attitude and organic immediacy to the proceedings.

With 'Wilderness' Jade Jackson has delivered an impressive roots-rock album and if the playing on the album is representative of her shows, catching these songs live would be a joy indeed.