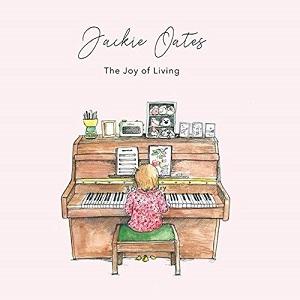 
If you weren't already aware that the Oxford-based folk singer-songwriter and member of The Imagined Village had recently become a mother, her new album leaves you in no doubt. Indeed, baby Rosie not only does she get a mention on the spare piano backed 'Spring Is Coming Soon', a traditionally styled children's lullaby written in the months shortly after giving birth (and reprised at the end of the harmonium accompanied arrangement of John Lennon's 'Mother'), but, the album recorded in Jackie's kitchen, she can he heard gurgling way in the background on traditional playground number 'Rosy Apple'.

The song's co-arranged with Jack Rutter who also plays guitar, banjo and bouziuki on the album alongside the likes of John Spiers on melodeon, Barney Morse Brown on cello and Megan Henwood on backing vocals while producer and fellow Imagined Village alumni Simon Richmond adds percussion and kantele.

Save for the Lennon number and a cover of Darwin Deez's 'Constellations' (which itself incorporates 'Twinkle Twinkle Little Star') sung a capellas backed by a children's choir of her students, the material is drawn from the folk repertoire, either traditional numbers or by legends from the genre.

The album opens with 'Freedom Come-All-Ye', a song written by folk revivalist Hamish Henderson, generally regarded as the most important Scottish poet after Burns. Given only minimal backing, the number has a personal resonance for Oates, her grandfather having served in the 51st Highland Division in WWII, about whom Henderson wrote the lyrics to 'The 51st (Highland) Division's Farewell to Sicily', but also being the last song she played with her father, who died from Sepsis five days before Rosie's birth.

His presence also inevitably informs the album, the traditional transportation number 'Virginny' hewing to his version of the song while the album's last two tracks, a simple strummed version of 'The Last Trip Home', written by Davey Steele for The Battlefield Band and one of her dad's favourites, and, thanks to the miracle of technology, a father daughter overdub duet of John Tams' 'Rolling Home', his vocals coming from a late night singalong, hers poignantly ending the song alone.

Her father and mother's lifeforce and their shared love of walking also inform the choice of the Ewan MacColl song, a farewell to his mountain days, as the album's title track, another spartan but evocative arrangement.

Spiers makes an appearance on an arrangement of 'My Shoes Are Made of Spanish', another children's song, here extended from the original single verse with two new addition by Oates drawing on references to now extinct clothing fabrics. It's followed by another from the family's musical memories, a version of Bill Caddick's 'Unicorns' with cello, plucked kantele and Mike Cosgrave on piano, its wintery feel echoed in 'Nay Ivy Nay', wheezing harmonium situating the tone for this 16th century carol variation on 'The Holly and the Ivy' and set to a tune by Lorraine Irwin.

From winter, it's back to spring with another traditional number, 'Catch Me If You Can', the story of a naïve young lass seduced and impregnated by a passing chancer off to war, collected by Marina Russell, a singer from Dorset in 1908, with its pizzicato violin, recorder, John Parker's double bass and Henwood on harmonies. Rosy puts in a cameo at the end too.

Mention of birdsong there leads on to 'The Bird', a haunting piano and cello arrangement of a melancholic song written by Lal Waterson back in the early 70s but never released until after her death and from there it's back in time to the Renaissance composer William Byrd for 'Hey Ho, To The Greenwood', tweaked to impart a lullaby feel, but retaining its round musical structure.

The remaining number again returns to the traditional well for 'Sweet Farewell', a soldier's off to war lament collected in Sabine Baring-Gould's Songs of the West, Cosgrave providing the piano backbone as the arrangement gathers around violin towards the end, though perhaps remarking to the maid left behind that his ghost will return to haunt her may not be the sweetest goodbye.

A deeply personal album born of life and death, but never sentimental or mournful in its sensibilities, it offers both surprises and familiarity and seems set to see her figure prominently in next year's Folk Awards.