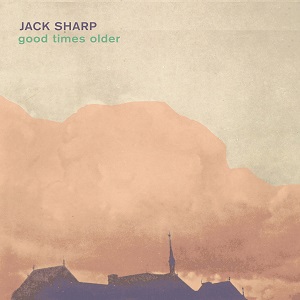 
Jack Sharp is guitarist and front man for Bedford's Psych Rock Wolf People. Listening to Wolf's People heady sound, mixing in early 70s electric bands like The Trees, the folk-rock eclecticism of Jethro Tull and the raw stomp of Black Sabbath, its not that entirely surprising that Jack has recorded a stripped back acoustic album that crackles with the sparse power of the classic folk masters.

His strident guitar on tracks like "Good Times Older" has the baroque attack of Martin Carthy or Roy Harper when he hits those big chords and his voice is confident, characterful with a mix of tender and raw. "Maids Lament has that fine guitar playing double tracked and Stick In The Wheel's Nicola Kearney providing an ethereal second vocal. Sharp's own "Soldier Song" is simply stunning, the slow tempo and Edwin Ireland's Cello and a glorious guitar motif creates tension.

Like contemporary troubadour Chris Wood and the wonderful Nic Jones, Jack uses picked notes, space and a captivating voice to draw you in and hold you. This is simply stunning. Sharp's "Gamekeeper", a well covered traditional song with a lilting tune and a rich lyric is another rewarding listen. Jack learned Robin Williamson's "God Dog" from the classic Harvest Shirley and Dolly Collins album. ANTHEMS IN EDEN. Sharp makes a tender, yearning and intimate lullaby, more Ralph McTell than the Psych Folk of the Collins Sisters or The Incredible String Band's version on the archival Chelsea Sessions album.

"White Hare" with the second guitar of Stick In The Wheel's Ian Carter has the knotty cadence of Jansch and Renbourn's BERT AND JOHN or Pentangle, fast paced and frenetic it perfectly suggests the pace of the hunt. Sharp's unaccompanied "Jug Of This" is a delight, his voice filling the space, a note of regret and sorrow in his delivery lifts this drinking song perfectly. Like "God Dog" Jack's delivery of "Northamptonshire Poacher" is intimate and real, the burr in his voice making it sound almost conversational, mixed in with that fine guitar. "May Morning Dew" is an achingly beautiful version of the traditional song, also covered in 2020 by Scottish singer Siobhan Miller, now there's a duet for another ALBUM. Jack's version has some of the feel of Bert Jansch's 1971 "Rosemary Lane", there is that sense of detached melancholia, despite the bucolic scene the singer describes. The second section of the song, swelled by Nicola's voice, Cello and Laura Smyth's concertina is simply stunning.

The final track because it needs a contemplative silence after it, I could of listened to that all night. There is an intimacy, a minimalism, a sense of space and isolation, with the tracks recorded in a beautiful beamed building outside Bedford, that seems very lockdown and both timeless and now. GOOD TIMES OLDER as a title nails it. That sense of reflection and slight melancholia, that feeling of detachment because you have to stop and listen. With this and the incredible HELP THE WITCH album, that Jack Sharp also appears on, I don't think it's a idle boast to say From Here Records are really releasing the best of contemporary artists working within the English Folk tradition.