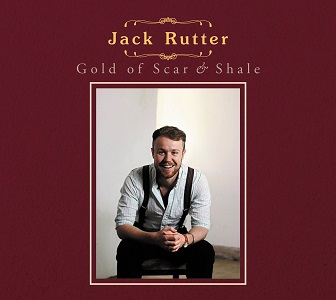 
Taking a giant musical leap from his one man and a guitar debut, Rutter pushes the boat out to bring in Sam Sweeney on fiddle, Alice Robinson on Northumbrian pipes and Sam Fisher on flugelhorn while he himself plays harmonium, duet concertina and bouzouki. However, again recorded as live and produced by Joe Rusby, nothing else has changed, his voice is as robust and forceful as ever, the songs all traditional, the bulk of them linked to his native Yorkshire.

It opens, however, pipes and flugelhorn to the fore, with a Scottish number dating from the Jacobite Rebellion, 'I Was Once A Young Ploughboy', sometimes known as 'Lovely Molly', about a young farm lad leaving his sweetheart (here Sally) behind as he goes off to fight for, in this Anglicised version, not James but King George.

Sparsely arranged for bouzouki and fiddle and the first verse sung unaccompanied, the first of the Yorkshire numbers comes with 'The Hills of Longendale', the words penned by Ammon Wrigley, the Moorland Poet, who lived in the hills of Saddleworth, and taken from Songs of the Pennine Hills, its description of the rougher parts of the landscape providing the album's title. Switching counties, 'The Lancashire Liar', a tale of boastful chap, opens with some lively fiddle from Sweeney, and, giving it some ta la rooing, adapts words from Harry Boardman and a the tune from both 'Herod and the Cock' and 'When I Was A Little Boy'.

Set to an arrangement of June Tabor's tune to 'The Old Garden Gate', the album epic comes with the six and a half minute 'Fair Janet & Young James', a suitably sober mix and match assemblage of words from the various versions of this Child ballad wherein the lass in question is ordered by her father to marry a French lord, whereas she loves, in all the original versions, a chap called Willie, by whom she is pregnant. Unable to escape, she gives birth, hands the baby to its dad who gives it to his mother before going to the wedding where Janet is taken ill and dies, he and the groom arguing about whether the church bells will ring for her. The story comes with different endings, so you'll have to listen to see which one he's opted for.

Co-arranged with Sweeney, it's back over the Scottish border for 'The Brundeanlaws', a jaunty and, as you might gather, fiddle-driven ditty about three young lads who climb a ladder to spend the night with the farmer's daughters, are questioned by the local police, deny everything but offer a warning to others to steer clear.

It's back to Yorkshire for 'John White', a song that recounts the true story of Private Frederick John White of Leeds,a member of the 7th Queen's Own Hussars who, aged 27, was sentenced to be lashed (the record states 150 but in a touch of Tarantino overkill Rutter ups it to 300) for striking an officer and subsequently died of his injuries. As befits the subject matter, it's given a spare acoustic guitar backing and heartfelt vocal as Rutter details the flesh-mangling punishment and the distress of White's parents.

In need of an uplift following this, 'The Shepherd's Song' sees Rutter joined by Robinson for a celebration of a life about the land and the lambs, along with advice to steer clear of strong drink, a song dating from at least the 19th century, originally recorded by singing shepherd Willie Scott in 1953. As folk coincidence would have a song of the same title was also part of The Copper Family repertoire, to which Rutter turns for the well-known traditional 'When Jones's Ale Was New', a drinking song dating back to 1594 in which the honest labouring men gathers in the Barley Mow to whet their whistles after work, here incorporating a self-penned instrumental coda dedicated to a pub Rutter used to frequent entitled 'A Little Jig For The Cumberland Arms'.

Sung a capella, 'Down by the Derwent Side' is a Yorkshire variation of 'Down By The Shannon Side', a familiar tale of a young maiden allowing herself to be seduced by a smooth-tongued officer who's already plighted his troth to another. Rutter remains in his home country for the final two numbers, concertina and fiddle setting the scene for an edited down version of 'The Sledmere Poachers' and its tale of a bunch of "gallant lads" and their dog gathering in the woods for some hare hunting, and closing with the simple acoustic fingerpicking of 'Fieldfares', not a traditional song as such but a setting of a mortality-themed poem by F.W. Moorman, who also wrote The Dalesman's Litany, about the titular species of thrush that winters in the UK.

The fact that many of the songs here are not only rare, but in some cases previously unrecorded simply serves to underline how Rutter is one of the leading names in keeping the English folk heritage very much alive.