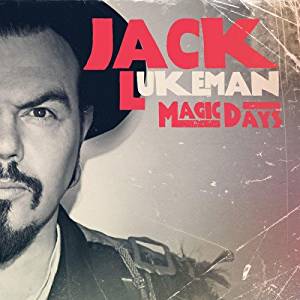 
Irish National Treasure Jack Lukeman is back with his first studio release since Northern Lights in 2014. One of the hardest working singers in the business, Lukeman has notched up 220 gigs in the last two years on the road, supporting the likes of Van Morrison and The Proclaimers, and has previously shared a stage with the likes of U2, Robert Plant, Elvis Costello, and Marianne Faithful. Lukeman even feels more comfortable on the road now than off it. Magic Days is all about finding the magic in the mundane, taking inspiration from the personal challenges in everyday life.

As you'd expect, Lukeman's powerful vocals are the standout here. His vocal style is formidable, especially on the opener King Of Soho which is a booming anthem which immediately grabs you by the lapels and gives you a good shake. It's not all about power though, as the album immediately segues into the ballad, Sweet As Freedom, which has a 70s splendour to it. There's even a nod early on to current events with Sky News Blues, a tongue-in-cheek blues number written after watching the daily worldwide tragedies on the news channel.

The highlight is probably You Are The Sea, with its understated start that builds into a barnstorming crescendo. It's a perfect showcase for Lukeman, demonstrating his full range. Diamond Daze is worthy of mention too, a wonderfully melancholic lullaby which keeps you enthralled throughout.

Magic Days is a real grower, and you'll find more to enjoy with every listen. While it's Lukeman's voice that will draw you in at first, there's a lot more going on here under the surface. Lyrically strong, superbly produced and full of novel touches, this is highly enjoyable music which you'll find yourself playing again and again.