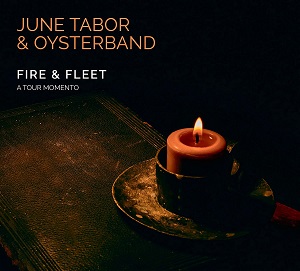 
The great triumvirate of folk-rock bands from the British Isles has to be Fairport Convention, Steeleye Span, and the occasional, but definitively wondrous, collaboration that is June Tabor and Oysterband.

All three seamlessly blend traditional acoustic folk with the extended possibilities of a rock backline. All three display a prodigious talent for original arrangement and integration of both traditional and modern material. And, unlike many in the folk world, all three are unafraid to use their material as an improvisational jumping-off point to somewhere new and interesting.

Which brings us to this new, partially-live, recording Fire and Fleet, by Ms Tabor and the self-styled musical molluscs.

Let's start with the vocal chores: while the singing of the early Fairports and Span depended largely on the strengths of their front women, the excellent Ms Tabor is strongly matched here by Oysterband's John Jones, while the rest of the band do a fine job of providing back-up harmonies.

The combination is used to fine purpose in call-and-response songs such as False True Love, and a beautiful acoustic version of Joy Division's Love Will Tear Us Apart - also notable for the sensitive 'cello and fiddle blending with a sweetly-fingerpicked guitar. I was no great fan of Joy Division, but this arrangement really brought out the beauty of the song, and I may have to at least partially revise that opinion.

The overlap of Jones' high baritone and June Tabor's deep contralto makes for a natural and effective musical dialogue with an unexpected apportioning of the higher parts to the man - Jones pitches top notes with ease in a manner reminiscent of Sting. The combination also makes for a great harmonic blend on their take on The Lyke Wake Dirge and I'll Show You Wonders (a refreshingly different look at a variant on The Cruel Sister).

The band's accompaniment is always sympathetic and in service to the songs - I'd particularly single out Pete Flood's atmospheric percussion, ranging from the eerie undertones of the Dirge, a positively thunderous attack in the breaks of I'll Show You Wonders, and a solid drive on the big surprise track of the album - a marvellous live version of the Jefferson Airplane hit White Rabbit. This really is the perfect vehicle for the strong contralto voice June Tabor has in common with Grace Slick. Alan Prosser and Adrian Oxaal also stand out for their guitarwork on a take on the song that is effective and all too short. More, please, next time!

Other high points of the non-traditionally derived songs are the old soul classic Dark End of the Street (which fits so naturally into a trad groove that it makes me wonder why it isn't a folk-club standard already), and Roseville Fair, which begins as the original Bill Staines romantic ballad, but turns into Les Barker's hilarious put-down of the banjo-playing fraternity - banjo and accordion jokes being the folk world's equivalent of the rock world's lead player and drummer jokes (examples of all available upon request).

The production throughout is excellent, and, if I ever became a teenage idol, or won the lottery (the chances of either are pretty much the same), I'd definitely recruit the sound engineer in charge of the live tracks - everything is clear yet warm, and perfectly balanced. Good job!

As you can probably tell, I'm enthused by this album. I think it's a masterclass in how to present this kind of trad/modern fusion. I also present a trad/acoustic-based radio show, and this has impressed me so much that it's going to be my next Album of the Month. Applause to all concerned!

Love Will Tear Us Apart