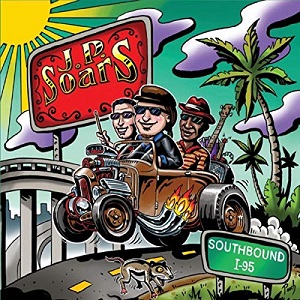 
John Paul Soars, better known as J P Soars, was born in California in 1969 and brought up in Arkansas. He is regarded as one of the best Blues guitarists around and, with his band, the Red Hots, he has built up an enviable following and reputation as a deliverer of superb blues music.

This latest album sees him venture slightly from the blues core of his music, with a touch of country, soul, roots and reggae. His gritty, down to earth, vocals all help to make this a pulsating driving album and give an indication of what a live gig from the band would be like.

Touring extensively throughout mainland Europe, J P has shared the stage with Buddy Guy, Joe Bonamassa and others delivering his very personal style of music.

All but two of the 15 tracks on this album have been written by J P enabling him to use his vocals to their best effect. This is arguably shown at its best in the dynamic "The Grass Ain't Always Greener" with its honky tonk piano and is a great example of what is on offer here. The title track "Southbound I -95" has an introduction which sounds as though it has been extracted from a Batman film, such is the speed of the delivery. "Satisfy My Soul" with its tenor saxophone backing is a great foot tapper of a song.

Although most of the songs on here are played at breakneck speed, J P can slow it down as amply demonstrated with the sultry sound of "Troubled Waters." I have only one negative comment about the album. That is that three minutes of the track "Go With The Flow" consists of chatting and a cockerel crowing in the background. I really do not get that at all! Having said that, the rest of the album is an excellent example of genuine blues guitar riffs and gritty vocals.

A number of superb supporting musicians all help to make this a "standout" album for lovers of great blues guitar music accompanied by expressive vocals. It is certainly a winner for me!

The album will be released in early March and I can heartily recommend investing a few pounds in the acquisition of it.