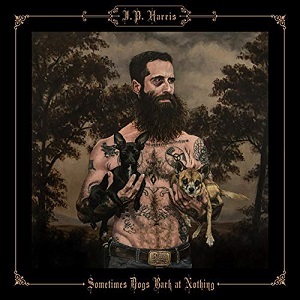 
A Nashville carpenter, when not working with wood Harris is working with music, blue collar country-streaked rock n roll and honky tonk tales of loving, losing and hard lives lived. For his third album, he enlisted Morgan Jahnig from Old Crow Medicine Show as producer and then sent acoustic demos to the six musicians he wanted to work with, asking them to spend five days thinking about the songs on their own before, without any prior rehearsals, they all met up in the studio to see what emerged. The result is a stunner.

It opens with Harris slapping down his passport to Presley's 'Promised Land' with the storming slide and Hammond-pounding opener, 'JP's Florida Blues #1' with its female gospel harmonies and lyrics that, based on his own experiences of touring with his band Tough Choices, talk of backwater bad deals, the highway and reds, blues, uppers and downers. The album ends in similar style with 'Jimmy's Dead And Gone', a full steam ahead ode to riding the rails and the hobo lifestyle, but in-between he pulls up a barroom stall and shows a less frantic side, including on the last dance sway of 'Runaway' which, featuring Kristina Murray on harmonies, reflects on the restlessness of a life lived on the road as he confesses he "never had the heart to stay and do right by my wrongs."

With its Texicana-like fingerpicked guitar 'Lady in The Spotlight' is pure early Kristofferson as it unfolds the story of a small town girl travelling to California to try and make it as a singer only to find the music business has as many predatory Harvey Weinsteins as Hollywood and that sleeping her way to the top might be the only path to realse her dreams, but that, for tonight, she's just a girl with no last name.

Moving from Kris to George, the pedal steel and fiddle shaded honky tonker 'When I Quit Drinking' draws on past struggles with personal demons, then it's over to Willie for the late night jazz-inflected blues of 'Long Ways Back'.

There's more old school finger-picker country with the John Prine echoing dobro-accompanied title track which essentially talks about the often irrational way in which men act, led by embedded gender compulsions, as he asks "why did I go out looking for answers, in the topless bars, with the pole dancers?" and observes that "Sometimes a girl's heart gets busted, by a guy she once trusted. Ain't no reason, 'cept that he was born a man."

Another number about life on the tarmac, 'Hard Road' takes a temporary break from the balladry to kick the tempo back up again for a classic styled trucking Southern rocker, but then it's back to the Jones and Nelson saloon for the lost and lonely with 'I Only Drink Alone', Mark Sloan providing the piano across which the tears flow, a task he reprises in more stately, melancholic style on the pedal steel weeping highlight 'Miss Jeanne-Marie' an Eagles meet Kenny Rogers storysong that, in the first verse, tells of a woman from the south falling for a no-good man from the north, only to switch to his voice in the second as he tells of his regrets at falling short of her expectations and love.

If his carpentry is of the same quality as his music, he can build me a cabin anytime.