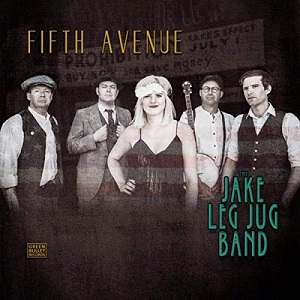 
An established favourite on the jazz and nostalgia circuit, this well respected and popular five piece have, following a line-up change, re-recorded favourites from their earlier albums and release this seventeen-track compilation.

Inspired by American music of the 1920s and 1930s, the band have evolved a contemporary style from a mash up of genres from the early 20th century, drawn largely from the novelty and comedy end of the spectrum. Recorded live, around a single ribbon microphone, the work shows the tightness of a band that have spent many years on the road.

The album opens with the lively comedy swing of 'I Can't Dance', with it's comedic call and response. Swinging like a barn door in a Texas breeze, the number rattles along with a gentle, bass driven, swing courtesy of Duncan Wilcox. 'Killin' Jive' is more of the same, with trombone from guest Mike Pembroke and cool jazz guitar from Neil Hulse, and some fine harmony scatting from the band.

Jug is used sparingly, Liam Ward generally sticking to harmonica. 'Some of these Days' features the smokey tones of vocalist Bryon-Rose, velvet dipped in bourbon. 'Caught us Doing It' is comedy romance, referencing music hall and early string band music with a single entendre an inch thick, including a comedic whistle and jaunty vocals. As is 'I love You', oddly programmed next, an almost identical arrangement.

'On the Road Again' is a country blues, a murder ballad, driven by banjo and a rather polite, humour-driven rendition of a grisly song. 'Your Feet's Too Big' references early trad jazz. Kitchen Man' has Bryony-Rose' back on vocals, but her reading of the number feels rushed and perfunctory.

The standout 'Little Black Train' has a gentle stirng driven vibe, and a broken rhythm, country harmonies in the chorus and an excellent dobro solo from Toby Wilson. Evocative harmonica from Ward, leads to a simple but well-judged resolution. The best track on the album, if a little too cheerful.

The music is well played, with solos competent rather than outstanding. Jug, when used, is far back in the mix, providing a distinct percussive edge. Material is varied and generally well chosen, but delivered with a humoured politeness that lacks edge and fire.

'I hate a man like you' sees Bryony-Rose gives a hint of what this album could be. She has a suburb voice and a knowing and sensual style.

This is a studio recording of a set, a compilation album, intended to be sold as a souvenir from stage from one of the best live jazz-lite bands on the circuit, and is well worth a tenner.

But the album is not intended to be consumed in a single sitting, and a difficult ask to review. Much less than the sum of its considerable parts.

Sugar In My Bowl