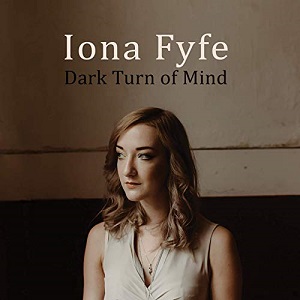 
Fresh from being crowned the MG Alba Scots Singer of the year, Iona Fyfe has released an EP with a difference. Well known for her interpretation of songs in the Doric vernacular of her native Aberdeenshire, her latest offering is all in English. Featuring songs that have been collected both in Aberdeen and the Appalachian Mountains, this new recording is meticulously research and sensitively arranged. From the blues infused title track, through the bluegrass tinges of Swing and Turn and the unaccompanied rendition of Little Musgrave, each track oozes style, class and musicality.

Two modern songs sit side by side with older songs dating back to the 1600s. The first, title track Dark Turn of Mind is from American duo Gillian Welch and David Rawlings. Iona and her band have created a blues infused arrangement that suits the slightly melancholy lyrics. The other is a tender, bittersweet version of If I Go, I'm Goin by Gregory Alan Isakov.

Juxtaposed alongside these are some stunning versions of traditional songs. The last track on the EP is a flawlessly sung unaccompanied version of Little Musgrave while Iona's version of The Golden Vanity is a very sympathetic amalgamation of several versions collected across Britain and America. Let Him Sink is also created from several sources, creating a very cohesive whole set to a new melody. Completing the EP is the Appalachian song, Swing and Turn. A lively, infectiously joyful tune from the singing of Jean Ritchie, this is sure to get your toes tapping.

For something that is a departure from what she is best known for, Iona Fyfe has delivered a little gem of an EP. The emotive delivery, exquisite arrangements and excellent musicianship make this a must buy release.