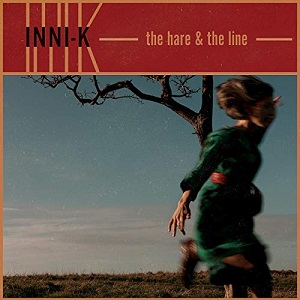 
Coming off the back of an acclaimed debut album, 2015's The King Has Two Horse's Ears, and having been named by RTÉ.ie as "one of ten fierce women defining Irish culture", The Hare & The Line has a lot to live up to. With a background in traditional Irish folk music, Inni-K melds together those elements with an indie sensibility. The result is something playful yet downbeat at times.

The title track which kicks off the album is a low key start, easing you into the record. It's a good introduction to vocals which can only be described as ethereal, the arrangement perfectly supporting her voice. Anaesthetic is more of the same, doubling down on the beauty of the surprisingly complex arrangements.

Crush hits a slightly different note, with a more upbeat, almost pop feel to it. Even then there's a vein of darkness in a nostalgic tale of childhood sweethearts. Just After was released as a single last month, and covers the heart-breaking first moments of loss, flawlessly capturing that moment in time.

Most notable on the album are the two Irish language tracks. Póirste Béil has a very traditional feel to it, and has the most experimental but brilliant musical accompaniment. Ón Radharc is Sia closes out the album, with the lyrics being almost unintelligible (especially for a non-Irish speaker), despite which resulting in a really enthralling song.

The Hare & The Line is an album that only reveals it's full depths on repeated listens; it'll take a spin or three to appreciate the lyrics alone. It is well worth the time though, as this is exquisitely produced, with lots of delightful touches throughout.