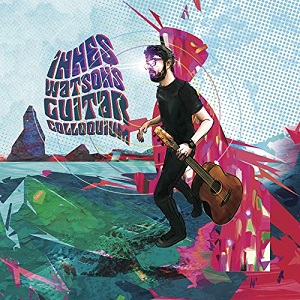 
One of the many wonderful things about Celtic Connections Festival is its New Voices project that commissions new music every year, providing a supportive platform for composers and the CD buying public with some exceptional albums. Innes Watson's Guitar Colloquium is one of those albums, the result of a 2011 New Voices commission. Innes set out to expand the repertoire for the guitar and has done it with a multi-guitar line-up featuring some of the best exponents of the instrument Scotland has to offer.

The album opens with two tunes that segue together, both written for Sandy Watson. These set the tone for an album that really never has a dull moment. One of only two tracks that aren't Watson originals on the album is Feds. A lovely, laid back old-time American fiddle tune that is best described as understatedly uplifting. This is a great little tune arranged with a good groove and lovely harmonies, all underpinned with a solid bassline. Mando Endo is a complete contrast, gentle and reflective. Riff based tune Stubbs is another toe tapping number, alternating between unison instrumental and flowing melody over syncopated accompaniment. The track makes excellent use of the string section throughout with perfectly timed interjections. Waste Not is a new, bluesy melody written over recycled chords. If you can "upcycle" music then Innes has definitely done it here, creating an intricate tune that provides a nice change of pace.

The second half of the album starts with a bang. Waste is reminiscent of some of Watson's offerings for Treacherous Orchestra and Croft No. 5, two of his other projects that are at the pinnacle of the Scottish contemporary music scene. Wee Dafty starts life with a gentle, atmospheric introduction. Don't be fooled, there's a cracking hornpipe just around the corner with some pretty nifty finger work. This is probably the most "traditional" feeling track on the album but take that sentence loosely! Roger is a tribute to the Fylde Guitars that are such a huge part of Watson's guitar style. Featuring not one, not two, but three Fyldes, this is a beautifully balanced track with the three guitars complimented by the strings again. The ensemble is so perfectly together here that only an expert ear would be able to pick the guitar lines apart. The album rounds off with Glasgow Guitar Colloquium, which was originally written for the 2011 commission but didn't make it to the performance. It's a fantastically bouncy track, ending in laughter that is just perfect to round off an album that must have been so much fun to record.

Innes Watson's Guitar Colloquium is, in his own words, "not just an album". This project is a much broader musical vision that is inspiring, innovative and inclusive. The music is fantastic and his enthusiasm and passion for the guitar shines through every track.