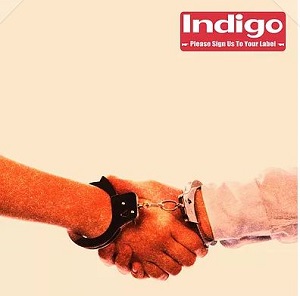 
Indigo are a tricky band to get to grips with, even before the music kicks in. With a quirky bio that talks of the foursome meeting atop Everest, and going on to call themselves insufferable, you would probably think them one of those bands that don't take themselves too seriously. Their cynicism seems at odds with the earnest title of the EP, a simple and very unmistakeably honest plea.

The music is equally inconsistent, not so much in quality as in tone. Afterthought kicks off the album; a low key electronic infused track which gives us a good introduction to the vocals, but it does take after its name a little. Just as the song feels like it's building to something, it ends in a sonic climax that feels tacked on. It's a solid, if unspectacular start.

The first single from the EP comes next, Distant Lullaby, and it represents a real change in pace. It's a joyfully irrepressible song, the type that sticks in your head for days afterwards, The Beach Boys crossed with The Lightning Seeds. Will It Ever Come To Me may be more muted, but it's not too dissimilar in that it will still leave you tapping your foot in appreciation. It keeps getting bigger, but never quite reaches the crescendo that you expect, which is certainly no bad thing.

The EP closes with Bypass, which has more in common with the opener than the middle tracks. There's plenty to enjoy, but it never quite decides to go for broke, which feels like a missed opportunity.

Overall Indigo is a band with a great foundation from which to build on, but do appear to still be trying to find their sound. This record has two sides to it, one that befits the kind of cynical indie cool that their bio suggests, and the other with more of an uncomplicated vibe that suits the title. Frankly there's plenty of room for both sides, and it'll be both interesting and exciting to see how they build an album. Whatever happens next, this EP gives them every chance of achieving their goal.