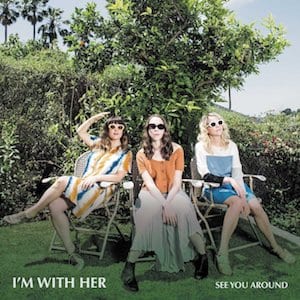 I'm With Her
Album: See You Around
Label: Rounder
Tracks: 12
Website: http://www.imwithherband.com


Their musical paths intersecting over the years, Nickel Creek’s Sara Watkins, Aoife O’Donovan from Crooked Still and Sarah Jarosz joined forces for a performance at the 2014 Telluride Bluegrass Festival. Intended as a one-off, it led to them touring together as I’m With Her in 2015 and now, finally, three years, two singles and an EP later, in their full length studio debut.

Produced by Ethan Johns (who doubles on harmonium and dobro), with Watkins on fiddle and ukulele, Jarosz on mandolin and banjo and O’Donovan on piano and synth and all three coming together on guitars and vocal harmonies it, perhaps inevitably, feels like a melting pot of their individual work, but that’s hardly a bad thing. Co-produced by Ethan Johns it features 11 originals and one cover, opening with break-up ballad ‘See You Around’, the strings and what sounds like synthesised woodwinds introduction giving way to a bright acoustic guitar strum before the arrival of the blues-rooted, melodically staccato, banjo and mandolin-led ‘Game To Lose’.

‘Ain’t That Fine’ is more Appalachian in mood, the same holding true of ‘Waitsfield’, the banjo-dappled leaving for new horizons song ‘Overland’ and the moodily slow ‘Close It Down’ with its sawing fiddle. But it’s the more experimental and adventurous arrangements that separate this from the crowd and bring an additional distinguishing edge to the likes of the sparse ‘Pangaea’ with its intricate harmonies (here only Jarosz and Watkins) or the repeated simple bass riff pulse, nervy banjo and brooding drums underpinning the rock sensibilities of ‘1-89’.

Given their association with the Prairie Home Companion, it’s no surprise to find a strong Grand Ole Opry feel to the lazing in the sun almost minstrely vibe of ‘Ryland (Under The Apple Tree)’ with its minimal bass, fiddle and guitar accompaniment and the lullaby crooning harmonies of ‘Wild One’, a similar laid-back, sepia-toned intimate ambience enfolding ‘Crescent City’. It ends with its sole cover, ‘Hundred Miles’ a previously unrecorded Gillian Welch song, initially performed as unaccompanied three part harmony before a drone appears mid-way, banjo and fiddle adding muted extra colour in the final moments.

It would have been very easy to make an album of immediately infectious, Nashville radio-friendly, bluegrassy country tunes, something each of them could do in their sleep, but this goes above and beyond such presumptions to produce a work that, in combining and honing their individual strengths, is intricate and bold in its vision and accomplishment while, at the same time, intimate and inviting.