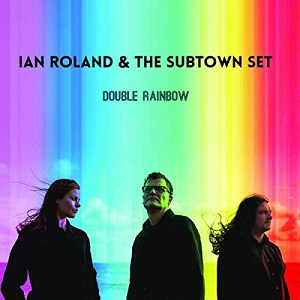 
Having seen Ian perform in several iterations, I have to admit that the current trio line-up, with Ian, vocals & guitar, Simon Yapp, vocals & violin and Jade Woodhouse, vocals & cello, trading under the Ian Roland & The Subtown Set banner, is, for me, the most satisfying. (I seem to recall being present at Jade's debut live appearance with the group where this thought originally occurred to me). Thus I fall into the category of those who have been eagerly awaiting this debut album. A wait that has been amply rewarded.

Initially recorded at Simon's Subtown Studios in Brighton, (from whence the group is named), and mastered at Airtight Studios in Manchester, the group were able to call, once again, upon the expertise of famed producer Nigel Stonier on a number tracks. Presenting as a decidedly contemporary folk group, Double Rainbow features 11 fine tracks whose influences span a wide spectrum. Listen carefully and there will be elements of Americana, skiffle, soul, indie-pop, rock'n'roll, and more, underlying the captivating songs on offer.

Opening track, The Valley, one of three single releases from the album, is a charming song which manages, at a stroke, to encapsulate the group's strengths - Ian's silky smooth vocals, tasteful violin and cello lines, delightful harmonies combining to create a finished product as catchy as a winter virus. Butterfly, with its heavenly strings, is a pure slab of nostalgia, both lyrically, "I remember climbing trees, you could taste that woodland breeze" and musically, with a melody and arrangements that recall balmy summer 1970's folk at its best.

With Songbirds, the talented Brione Jackson features prominently, providing celestial vocals on one of the album's strongest tracks, as harmonies weave in and around the strings (and vice versa) creating a beautiful sound. Whilst In The Darkness and Colour Me In might be more mainstream/radio friendly, Searchlight, memorable in the extreme, had me searching my Sutherland Brothers & Quiver and early Andy Fairweather-Low collection, convinced that this was a cover. It isn't, but this cut certainly compares well.

Human Too, (aka Shopping Trolley Wheels), brings a change of tempo, and, depending upon one's interpretation of the lyrics, brings a darker edge to things, "didn't see you coming, totally unknown, just another human soul, going to shoot or say hello", before the gentle love song, Shooting Star, generates a dream-like atmosphere.

Day Became You and the cajun-tinged Gravity Inside present the rockier side of the album, albeit with, once again, the satisfyingly soaring strings, and confirms the group's ability to effectively traverse styles and genres. The album closes with another strong number, the title track, Double Rainbow. I can't imagine that I will be the only one who believes that Laurel Canyon has relocated to the South Coast of England with this one.

Double Rainbow is an eminently listenable and enjoyable release. There is a pleasant, laid back feel to the music. Ian's vocals have the propensity to put the listener at ease, as do the warm harmonies, whilst the violin and cello add depth, variety and interest. Brighten up a miserable winter by treating yourself to a listen.

The group launched the album on Saturday, 29th February, with an in-store performance at 1.00 p.m., at the excellent Union Music Store in Lewes.