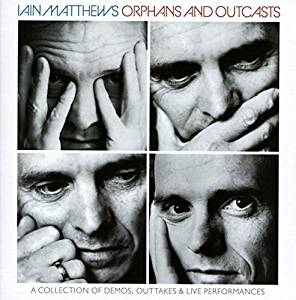 
This 4-disc box-set gathers together the three privately-issued limited-edition discs (cassettes and CDs) of rarities (outtakes and demos) recorded during the course of Iain Matthews’ long career through to the late-’90s; these are supplemented by a fourth disc of previously unreleased rarities largely dating from the late-’90s.

And so to the origins of the Orphans series… Back in 1990, Iain Matthews was already over two decades into his musical career. A trailblazing start with Fairport Convention (through till early 1969) was followed by the glory days with Matthews Southern Comfort and Plainsong, then an erratic run of ostensibly solo albums which at the time were noted less for their musical content than the unpredictability of when and on which label they might appear (if at all…), so by the end of the 1980s Iain was at something of a low ebb commercially and, for a short period, without a record-label deal. At the behest of the US mag Dirty Linen, he trawled through his own tape archive for what the mag intended to issue as a mail-order-only “collection of demos 1969-79”.

The resultant disc, cannily titled Orphans & Outcasts, released in 1991, was almost as welcome to fans as the Fairport cassette compilation Heyday that had been issued over a decade earlier. It kicked off with five 1970 tracks from the Southern Comfort lineup – three outtakes from the Later That Same Year album and two (Touch Her If You Can and a cover of Neil Young’s I Believe In You) from radio session tapes. Then there’s four exciting tracks from an April 1971 radio session where Iain’s backed by Richard Thompson plus Messrs Roberts, Conway, Donaldson and Whiteman, including a blistering cover of Dylan’s It Takes A Lot To Laugh. The disc also contains a rough-mix Burritos cover previously only issued on an obscure sampler, and four excellent tracks from a 1972 Plainsong radio session including a cover of Gene Clark’s Spanish Guitar and an early tryout of Tigers Will Survive. An even more intriguing inclusion is Iain’s fine cover of Thompson’s masterly Poor Ditching Boy, slated for the lead track of the Some Days You Eat The Bear LP but unaccountably pulled from the test pressing. One solitary live track plus five demos (two destined for 1975‘s ill-fated Go For Broke LP) complete the disc.

The second disc in the Orphans series, issue in 1993, chronicles the 1980s, a period which is admittedly “not everyone’s cup of tea” – a sentiment with which I both concur and sympathise. Indeed, I find it the least interesting and musically least satisfying. Experimentation was the order of the day for Iain, and for the first three years of that decade both his writing and singing were heavily influenced by David Surkamp (Pavlov’s Dog), while the funky keyboards and echt-80s backdrops of his work with Hi-Fi just don’t (even now) seem to realise the potential of the songs. The disc then moves on to a series of rough Songwriting Demos and demos for the Shook album, the sequence resuming in 1987 (after Iain’s brief recording hiatus while temporarily pursuing a career in A&R) with tracks from the Congress House batch of Jules Shear songs. 1989’s Pure And Crooked sessions form the basis of the second disc’s final three tracks.

The third Orphans disc, issued after a gap of six years in 1999, brings in some more valuable cuts. It begins with an acetate of the A-side of a 1965 single by Iain’s first band The Pyramids (their second, unissued release), which along with Iain’s signature vocal features some charismatic lead guitar work. Then a disc highlight, in the form of a recently discovered 8-track demo of Woodstock (complete with some now-beautifully-audible acoustic guitar parts), three 1971 radio session tracks from the Matthews/Roberts/Thompson trio (containing some especially captivating filigree guitar interweavings), and a stunning Plainsong demo of I’ll Fly Away which even at a mere 40 seconds demonstrates that lineup’s tremendous a cappella power. The disc’s light-relief interlude comes with Iain’s curious electropop Shook-era outtake cover of On The Beach (the Cliff Richard number not the Neil Young), after which the selection picks up nicely with two 1886 Changing Lines demos and a pair of glorious 1991 duo demos with Andy Roberts including the poignant Miles Davis tribute God’s Empty Chair that eventually found its way onto the Skeleton Keys album. A rather disposable children’s song and a couple of 1997 live tracks complete the third disc.

The fourth disc of this set represents Iain’s own response to the mooted idea of re-releasing volumes 1-3, and his continuing commitment to maintaining his personal archive. A very recently unearthed 1978 demo of the short-lived duo with Bill Lamb and an electrifying 1988 live trio performance of Seven Bridges Road prove hard acts to follow. There’s a clutch of early-’90s Songwriting Demos which more than anything else provide revealing instances of how songs evolve over time with different arrangements giving a new complexion – as with compositions like Leaving Alone and Ballad Of Gruene Hall. Then a worthy co-write with Clive Gregson (Even If It Kills Me), and a track from the Plainsong demo session with David Halley; some arguably less satisfying (at any rate to Iain himself) unfinished outtakes destined for late-’90s albums God Looked Down and New Place Now. A 1998 bare-bones duo (Iain Adventure) studio recording of the Neil Young classic Mr. Soul brings back the high standard, and finally the set closes in best Matthews style with a heartfelt 1999 (post-No Grey Faith) demo of Stranded recorded with Jim Fogarty and Walt Rich – which we’re told was just one of the pair of tracks recorded on that occasion (begging the question of whether there will be a volume 5 of Orphans – certainly, Iain’s candid liner note states that a selection had had to be made from a suitable 20-25 tracks rediscovered from his archive.

Congratulations to Cherry Red for this enterprising set, which sports a wonderful 36-page accompanying booklet (with comprehensive essay by Clinton Heylin and individual disc notes by Iain Matthews himself). The man’s artistic consistency and longevity is remarkable and to be celebrated, for sure.

Your Own Way Of Forgetting