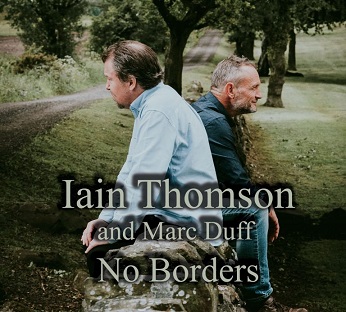 
It's been eight years since Scottish singer-songwriter Thomson last released an album. However, in-between a busy career as a fencing contractor and preparing to emigrate from Argyll to Sweden, he's finally found time to nip into a studio with long-time friend and Capercaillie co-founder Duff for this all-new collection of self-penned songs.

Again, rooted in life in rural Argyll but casting its view across wider horizons, it's fuelled by both the personal and the political, it opens with 'All Our Stories', Duff on bouzouki and uillean pipes, a five-minute song born from an oral history project in aid of the Ulva School Community Association, recalling and recording the area's legacy and its changes over the years.

Joined on accordion by John Somerville, 'The Winter Wind Blows' celebrates the sometimes harsh beauty of the landscape, drawing from experiences of his day job and the often gruelling physicality in requires. Taking a wider perspective, Hannah Fisher on fiddle,' Reunion' is pretty much about what it implies, the coming back together after years spent apart, partly thanks to the way technology has shrunk the world.

Social comment makes its first appearance with 'The City Sleeps', a song which, inspired by finding himself in Glasgow's red light district at 3am thanks to a mechanical breakdown, talks of those women who, slipping through society's safety net, work the twilight zone and nights of misery to feed their needs. A similar theme enfolds 'Living On The Edge', Thomson piano and John Saiche playing fretless bass, sung from the perspective of a recovering alcoholic and climbing the mountain to sobriety.

'Back To The Sheds' returns to the theme of working the land, accordion and fiddle colouring a first-person song about sheep shearing and those who follow the trade. However, while some crafts and ways of life survive, others have been swept away by time and political pressures. Featuring Duff on whistles, 'Glendale Martyrs' recounts the fight by the crofters of Skye who, led by John Macpherson of Glendale, refused to submit to the Highland clearances of the mid C19th, eventually leading to the crofting act affording them security of tenure.

Again featuring whistles and bouzouki, the fragility of living with security in the Highlands is also at the heart of the swayalong rhythm 'Fate Is Knocking At My Door', his own experience of having to move twice in six months and a subsequent enforcement order when he took to living in a caravan providing the basis for a song about how easy it can be to be uprooted from your culture.

Which, in turns, leads to the album's title track, a reflection on what drives refugees to risk everything crossing hostile oceans in unseaworthy boats, Thomson's fingerpicked guitar bolstered by fiddle, accordion and uillean pipes.

Along with 'The Long Road Home', another pipes-shaded melancholic song about rootlessness, change and the need to find sanctuary and refuge, the album's completed by its longest track, Thomson on piano for the closing 'An t'Eilean Alain', a Gaelic-sung musically pastoral setting of a poem by Angus MacTavish written while a school border about missing his home in Mull.

A mist-hung album suffused with longing, nostalgia and a love of the land, it deserves a far wider audience that it will likely receive and I look forward to hearing how Thomson responds in song to his new Scandinavian life.