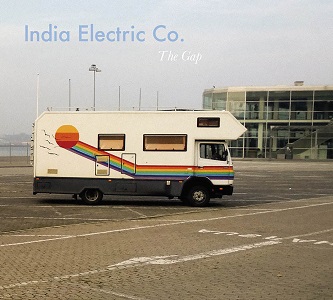 
The Gap represents an evolution in sound and style for India Electric Co. Whilst all the unique elements that make up the duo’s signature style are present, the journey of the recent trilogy of EPs has led them into a new and exciting landscape of arrangements and lyrical inspiration.

This sense of growth is clear from the opening track with the soundscape augmented by percussion. Being familiar with the back catalogue of India Electric Co., the new texture was an instant call to cast aside expectations and enjoy this step into unexplored territory. This sense of continuing advancement is not an easy task for any creative group with so many releases already under their collective belt, but it is one achieved repeatedly across this new album.

As with previous releases, Cole Stacey’s vocal takes centre stage and his heartfelt often intense delivery comes through effortlessly on the recording. As ever Cole’s voice is dressed in the rich and rhythmic accompaniment of multi-instrumentalist Joseph O’Keefe. Joe makes light work of violin, piano and accordion to name just a few of the instruments he plays on the album, and he brings a balance of light and shade with his expressive and nuanced playing style.

If that gives the impression that the album is swamped with gratuitous layered arrangements, it’s important to note that in reality the duo have found beauty in simplicity. These sometimes delicate and transparent textures leave nowhere to hide, but musicianship of this level doesn’t need to shy away from such exposed moments. Statues, a track built on a pizzicato violin ostinato, is a fine example. Here other instruments weave in and out of the skeleton of the violin motif and the overall sense is one of constant forward momentum. Again, later in the journey of the record, Scarlet is similarly beautiful in its restraint. The piano is warm and resonant and as the track continues, cinematic washes of strings and cascading melodies grow around the voice.

The raw sound of prepared piano, guitars and sustained instruments is contrasted with shimmering synth sounds elsewhere on the album, perhaps loosely reminiscent of Max Richter’s blend of real strings and bass pads. For a moment the closing track, Tempest II, transported me to the edges of the iconic soundworld of Blade Runner. It’s a cohesive project from start to finish, but also rewarding in its diversity.

The influence of musical styles from multiple cultures is here synthesised into something new. Folk melodies and rhythms may form some of the building blocks, but still more of the underlying structure is crafted from carefully distilled poetry and prose. Whilst the music retains elements from the roots and acoustic genre the end result is definitely not folk.

Be captured by the intensity and purpose behind Cole’s delivery of cleverly distilled lyricism. Be swept away by the intricate and effortless interweaving of cycling ostinatos and melodies. Take a few moments to be in awe of the incredible ability of two musicians caught on a beautifully crafted album, from track listing to production. Then, go back and do it again and again.