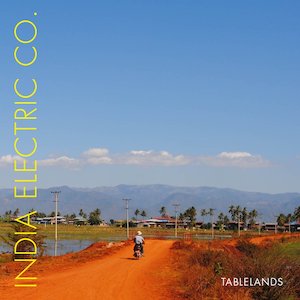 India Electric Co
Album: Tablelands
Label: Self released
Tracks: 5
Website: http://www.indiaelectricco.com/
.Tablelands is the third in a triplet of EPs released by India Electric Co. exploring ‘contrasting city and country themes’. Each EP has its own distinct flavour, each highlighting of one of the three key strands of the India Electric Co. sound. The complete set forms a clever triptych that together paint a complete picture of all the various nuances and flavours they so inventively encapsulate.

This EP picks up the world music thread that weaves through all their records. The five tracks layer diverse influences; latin, African and eastern rhythms, Scandinavian, traditional British and Balkan melodies and lyrics inspired by a range of literary sources.

The songs on this EP twinkle and sparkle. Joe’s expressive violining in turn swirls with esoteric mystery (Only Waiting), skips jauntily with trad British folk influence (Lila) and meanders prettily with bucolic charm (Gold in the North). Lila is a standout track, opening with lounge style piano cleverly paired with Latin percussion, it flows and builds with soulful vocals and dancing layers of violin before outroing with a simple picked guitar line. This song shines a light on India Electric Co’s brilliance, melding contrasting musical themes and drawing lyrically on two very different poems, crafting the feelings they evoke into this beautiful and uplifting celebration of a song.

Lyrically Cole has cleverly distilled the essence of well known Indian and British poems, particularly Edward Shanks’ In Absence, from which whole stanzas have been encapsulated in a single line of song - ‘All the world in this small flame’. The literary references really are somewhat by the by though, and veiled and abstract enough for the listener to form their own interpretation. Vocally, Cole’s expressive and yearning delivery of the songs is compelling and captivating, accessible and relevant.

As ever their music is adeptly arranged and produced, many layered and multifaceted; repeated listens are endlessly rewarded. As their strapline says - ‘sometimes folk, sometimes not.’ But always musical genius.

India Electric Co. are mesmerising and captivating live performers too. This October they head out on a headline tour in association with the Churches Conservation Trust. Performing mostly unplugged and by candlelight in historic churches that have fallen from regular use they are guaranteed to be spellbinding shows. Check their website for dates.