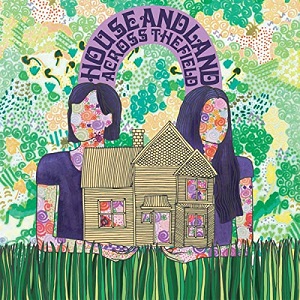 
It’s approaching a couple of years now since the debut album from this North Carolina-based duo fairly knocked me out (I admit somewhat belatedly, since it was originally released in 2016), and here they’ve produced the perfect sequel. The partnership of Sally Anne Morgan and Sarah Louise Henson is a heavenly one for sure, since their deep empathy with – and unqualified respect for – their Appalachian heritage is as apparent as their intense musical and spiritual rapport with each other. Of course, since the debut House & Land CD Sarah Louise has released an incredible solo album of boldly experimental electric guitar music, Nighttime Birds And Morning Stars (reviewed here last month), and this experience may well have subtly informed her approach to texture and fills on the exclusively traditional House & Land repertoire (for instance in the use of such devices as polyrhythms and oscillating patterns).

The aural bridge between past and present is especially clearly illustrated in elements such as the juxtaposition and coexistence of electric guitar and clawhammer banjo on the opening track, a spookily harmonised rendition of the Two Sisters ballad sourced from a 1955 recorded version but here also infused with a parallel, authentic psych sensibility. A comparable instance of ancient and modern placed in careful balance comes with Rainbow ’Mid Life’s Willows, which blends the textures of rippling twelve-string guitar and fiddle underneath a melismatic, almost oriental vocal line. Cursed Soldier takes the ribald Light Dragoon tale into a different realm with Sally Anne’s cutting, caustic vocal line that has the effect of shifting the emphasis and perspective. On Precious Jewels too, the harsh, raw timbre of the vocal recalls the back-to-basics sound of vintage Cordelia’s Dad.

But this combination of ear-splitting close-up intensity and almost deliberate emotional distancing is but one of the devices used by Sally Ann and Sarah Louise to transform these ancient ballads into vehicles of empowerment and by means of what one might term purposeful feminisation of the songs’ protagonists. In this context, interestingly, the album’s centrepiece is a close-on-eight-minute instrumental excursion into Carolina Lady, whereby only the melody remains, extemporised – this most probably serves to emphasise the disempowering nature of the original ballad. Yet the very act of removing the words altogether might seem a somewhat bizarre, nay extreme interpretation of Sally Anne’s statement that “it does the songs justice to sing them how you feel them, even if that means changing a few words”… ?

Either way you see it, the defiantly altered-state nature of House & Land’s reimaginings really does breathe new character into each song they tackle. It all comes together in the eerie, ethereal close vocal harmonies, the abundantly creative instrumental scoring and juxtapositions and adventurous approach to melodic line through layering. A striking new insight is gained into Blacksmith, for example, through the use of an excitingly lush yet tellingly sparse combination of whistles, shruti drone, fiddle and glockenspiel as a backdrop for the ladies’ curiously dissonant harmonic portrayal of the lyric. It’s seriously spine-tingling: an absolute masterstroke, and definite choice for album standout. But I can’t omit honourable mention for another of the album’s highlights – the closing track – which delivers a delicate whistle-and-banjo-led exploration of Ca’ The Yowes that sounds primal, timeless even beyond its pre-Burns origins.

In the sphere of reinterpreted tradition, House & Land are truly unique: intelligent, empathic, creative and yes, very special indeed. This album is unbelievably invigorating, in all the best ways.