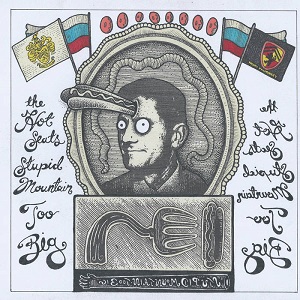 
A bluegrass quintet out of Virginia, this is their first release in three years, making up for lost time with a mammoth track listing, albeit two of them clocking in under two minutes. Lining up as Josh Bearman, Ben Belcher, Edward Brogan, Jake Sellers and Rudy Bzdyk variously on guitar, banjo, bass, accordion, fiddle, piano, percussion and trumpet, it's a primarily uptempo affair, the only slower numbers, coming back to back, being the two shortest, a banjo and trumpet duet instrumental arrangement of Jimmy Rogers classic 'Miss The Mississippi' and the strummed title track which flips the usual tale of folk leaving the city to return to their mountain homes.

It all gets underway in fiddle and banjo blazing stomp style with the traditional 'Ida Red', rolling into the mid-tempo 'Springtime', a paean to the joys of the season, albeit with the focus on the wild abandon of procreation.

Balancing songs and instrumentals (including versions of 'Tennessee Mountain Fox Chase' and John Hartford's 'Benny Martin Special #2'), I'm not going to run through all the numbers individually. However, if this is your sort of music the attention should be particularly directed to numbers like the hot club coloured 'Bad Decisions', the socio-political commentaries of waltztime 'Compliance' and the frisky satirical 'Gun Crazy (In The USA)', the anti-romance goodtime blues 'I Ain't That Guy', the lazy jugband feel of Briney Foam' and the bouncy banjo and fiddle closer 'Life Story' that charts the short/long journey from birth to death in under four minutes. Consistently providing impossible to follow sensations on the festivals circuit, they can fire up that feeling on disc too, grab yourself a place in the front row.