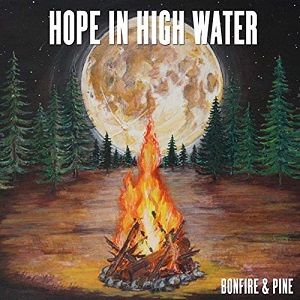 
Hope In High Water turns out to be a (somewhat enigmatically-named) duo comprising Josh Chandler Morris and Carly Slade, natives of (wait for it!) Milton Keynes - which on the face of it is a most unlikely origin point for their kind of musical expression. They first arrived on the live circuit in 2016, and by all accounts quickly developed a fiercely loyal following, then in 2017 released their debut album (Never Settle). Their trademark modus operandi was to explore unusually tough subject-matter within a deceptively simple, determinedly stripped-back Americana/folk setting. However, in the intervening couple of years, Josh and Carly's personal circumstances have changed, in that they "left their full-time jobs and moved to the country to live in a caravan and pursue a freer and more fulfilling way of life"; this has resulted in something of a shift in attitude and response on the new set of songs comprising their followup offering Bonfire And Pine.

The intense emotional pull that the duo's songs invariably generate remains the epicentre of their writing, but is reinforced and strengthened here, while on a purely musical level Never Settle's basic rawness and sparse vocals/guitar/banjo sound-world is now to some extent augmented with drumkit (and occasional violin) courtesy of additional musicians Luke Yates and Darren Capp. On a handful of tracks (Healed, Pray Away, Here Lies, Escaped Lions & Empty Oceans) they get to sound almost like a full-blown contemporary-Americana outfit: sometimes with electric guitar in tow even, but also often with a prominent backbeat - even on the soulful, florid and almost flamenco-style acoustic-guitar-driven number Taken Too Much Pride.

Notwithstanding this (ostensibly cautiously confident) degree of musical embellishment, though, for me many of the new disc's high points come on its more stripped-back moments, like the title song with its warm-yet-acerbic combination of imagery, and the painful, if cathartic first section of Stronger Than You Know. On Grenfell (a haunting response to that tragedy that retells a participant's real-life experience), something of a Gillian Welch influence is discernible (and pronounced), especially in terms of its acoustic guitar patterns and melodic development. Alone also packs a real punch, hitting home with full force when the lonesome fiddle solo kicks in to succeed the eerily keening chorus with Josh and Carly's stark combined vocal onslaught. Pull Apart The Pieces is a similarly emotive commentary on the progress and disintegration of a relationship.

The lead-vocal role is apportioned more or less equally over the course of the album, between Josh's distinctive, world-weary, if slightly abrasive voice and Carly's raw, strongly passionate and also slightly abrasive (tho' in a different way) voice; moreover, when the two voices collide and/or work together and harmonise the combination is seriously spine-chilling, complementary rather than jarring. But arguably the album's most strident track (from a purely listening angle) is its closing song, Something Unnamed, which finds Carly harmonising with herself (with only a determinedly basic guitar riff for company), to quite awesome, and distinctly brain-piercing, effect.

As I've tried to indicate above, the range and depth of import of the songwriting on this new offering proves even greater than on its predecessor, naturally mirroring in its very expressiveness its altogether more complex emotional progressions and resolutions. For instance, on It's Over Now Carly the state of adulthood is represented almost as a kind of light-at-the-end-of-the-tunnel after the trials and traumas of childhood and early life. This directly follows on from Healed, Josh's expression of the journey of "moving-away from grief into acceptance", coming to terms with the heartache by way of "accepting the things we can't change and choosing to live in a more loving way". Not always an easy ride, then, nor a straightforward process. Admittedly, on some of the songs it's not always possible to catch all of the lyrics even considering the stark, upfront and comparatively unadorned nature of the delivery, and in this regard it would've been good to have lyrics available somewhere, either in an accompanying booklet or on the duo's website, for after all, their words are of prime importance in the scheme of these songs. But there's no denying the sheer visceral impact of Hope In High Water's music, which both commands and demands your complete attention at all times. Bonfire And Pine is, quite literally, a stunning album. So go seek it out - come hell or high water!