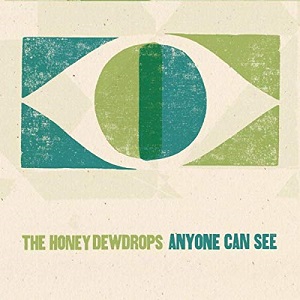 
I first encountered the music of this Appalachian-Virginia-born duo (Laura Wortman and Kagey Parrish) around three or four years back with their lovely fourth album Tangled Country. In a fairly obvious sense, Laura and Kagey’s followup album, Anyone Can See, both promises and delivers more of the same, in other words another collection of (almost exclusively) self-penned songs that resound with the gentle intensity of performer empathy and togetherness that spreads right out into the listener’s consciousness via the deep spontaneity and carefully coordinated natural sonic space of their live-in-the-studio music-making.

When reviewing Tangled Country, I couldn’t avoid commenting on the similarity between The Honey Dewdrops and the Gillian Welch & David Rawlings partnership in terms of overall sound world, delivery and general feel. Although that observation still stands to some extent on Anyone Can See, it’s not as pronounced or pervasive this time round, especially once you get past the first couple of tracks and/or make yourself listen beyond. The duo’s defining sound is still intimate, close and warmly communicative with a humble sincerity and a simple charm and beauty that’s very compelling indeed. Laura and Kagey are fortunate to have again enlisted as co-producer, engineer and mixer Nicholas Sjostrom (who, having also worked on Tangled Country, clearly has the full measure of the duo’s talents).

The songs on Anyone Can See are well up to the standard of its predecessor – stylistically, they deliver a classy, and classic, brand of backporch folk-Americana that communicates directly and authentically straight to the listener how they’re trying to make sense of the world of today in portraying, with close realism, “the sense of living in a time and place that is patterned with disconnection but also reveals humanity, vulnerability and the existence of grace”. All those qualities are present in the duo’s lyrics of course, but are at the same time also completely at one with the special, focused intimacy and clarity of their performance (their close-knit vocal parts and magically intertwining guitar lines are, as ever, to die for).

The duo’s experiences in their current home in urban Baltimore are, inevitably, also mirrored in a number of the new album’s songs; Going Rate is a sobering reflection on the protests and the curfew that surrounded the death of Freddie Gray in 2015 while in police custody, while Welcome To The Club shifts into the sphere of irony with its take on the duo’s changing neighbourhood of Hampden and Rainy Windows depicts typically overcast and wet days spent in the urban environment. Opening the debate out into immigration, For One More takes the humanist, inclusivity view on immigration, while the album also includes an instrumental cut (Ecola), which pits a softly picked banjo figure against a lyrical guitar backdrop.

Having said all that, the album’s solitary cover – the lesser-known Hank Williams number Ramblin’ Man – is brilliantly turned, with some spine-chilling duo harmonies and heart-stopping vocal control from Laura in particular; I’m sorely tempted to pronounce that song one of the album’s standout tracks, but daren’t do so for fear of making the duo’s self-penned material sound less worthy!

The album package is attractively eye-catching (yeah, pun intended I guess!), with a minimalist arty design that matches the playing (and song lyrics should be available from the duo’s website by the way). This is a top-drawer folk-Americana album, no mistake, one to which I’ll be returning often until Laura and Kagey’s album number seven arrives.