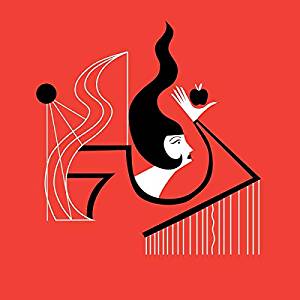 
This Newcastle based six piece have been on my radar for a while, but I only really started listening to them properly in the middle of last year. I like it when it is hard to pigeonhole music, when you have to look across genres to find where its influences truly lie. I like music to be a challenge. So when the opportunity arose to review their new 'Take A Bite' album I didn't need asking twice.

From the opening bars of lead single 'All I Got Is You' people will undoubtedly make comparisons with Blondie in their pomp which, while a huge compliment doesn't go nearly far enough in describing Holy Moly's music. Ruth Patterson's powerful lead vocals occasionally add a vibrato that really adds depth and interest. 'Upside Down' is a knock out track that for me is also single material, my immediate favourite, and will be in my head for a long time after I've finished this review.

Patterson's fiddle exchanges occasional blows with Conrad Bird's trumpet in the slower tempo, Byrds inspired 'Can't Get Enough' before the mood infringes rockabilly territory with 'Kiss Me Before You Go'. This introduces Rosie Bristow on accordion backed by a bouncing rhythm from Tommy Evans (drums) and Jamie Shields (bass guitar). 'Sister' has a feel of Curved Air's 'Backstreet Luv' from 1971 and is where Nick Tyler's electric guitar comes to the fore, so by the fifth song each member of the six piece have made their presence felt.

I said in a previous review that all good albums seem to have one track that changes the pace, and the piano introduction to the ballad 'I'd Give It All' is a moment of deceleration to give the listener time to breathe and take stock. It is a beautiful song amid Holy Moly's "party music for the masses", and the perfect lead in to the eastern infused title track 'Take A Bite'. 'Through With Talking' resumes the rock-pop theme of the album, very much an album track with an interesting rhythm and some terrific playing.

'Who Do You Think You Are' is another 'album track'. It's at this point in the album that you realise these guys can really play, and that this is very much a piece of work that should be listened through to get the full flavour of what the band are all about. They describe "really living" the album song by song, with Matt Terry's excellent production and artful ideas (he made them dress up in '60s clothes for 'Can't `Get Enough') to guide them through the process.

And then it's back to the bazaars and souqs for the introduction to 'Naked in Budapest'. Bird's lead vocals, overlay a mix of middle eastern, eastern European, and world jazz influences that really works. 'This Little Light' gives the listener something different again, holding the jazz theme but providing us with something more akin to a 1960's beat single.

This album is fun. It dips in and out of different decades to deliver something very much of our time. I wholly recommend it, whether for a break from the acrimony and misery meted out to us daily through our media, or whether you just want to get up and dance. It is a shining light that has been delivered by a group of musicians who are all very much on the same page. Holy Moly have moved on from being "a real ragtag folk band" (Bird's own description), and if there is any justice in this world, this album should hit the mainstream.