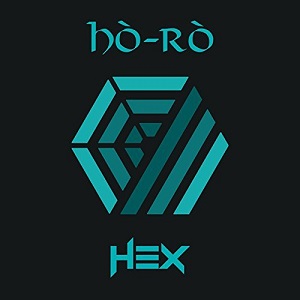 
Scottish sextet Hò-rò have a enviable array of young musician and up and coming awards and now with a bigger line-up and a second album which oozes ambition, 'Hex' looks like a strong contender for one of the albums of the year from Scotland.

One of the early highlights of the album is 'Walk The Road' is led by vocalist Lucy Doogan, a plaintive melodic love song, catchy and a nice early introduction on this album. 'The Pup' is on familiar territory for those who are into bands such as Mánran, off beat rhythms, blistering reels with a ceilidh feel, which I think is fair to say they are heavily influenced by.

One of the stand-out musicians on the first few listens has to be Calum MacPhail who plays the Accordion superbly with the track 'Nuggets' being one of his shining moments. An interesting instrumental, sounding like an 80s disco/funk number, with another Accordion led reel over the keyboard part. Hò-rò are trying to mix things up on this particular track and after a couple of listens the track really is a very well constructed blend of styles. Every musician seems to bring something to this album and each of them have their shining moments, letting the songs breathe and have space, especially with the amount of instruments they have.

Sung in Gaelic, 'Muinntir Mo Ghraidh' is one of the stand-out tracks so far, the two vocalists of the band, both male and female on this album switch from English and Gaelic giving depth and diversity to this album.

'Puirt-A-Beul' in Scottish Gaelic translating literally as 'tunes from a mouth' is a style of singing, often referred to in Ireland as lilting, is the final song with lyics on this mostly instrumental allow. It has a mellow reggae vibe whilst still retaining a Scottish feel. This album really does come into its own when the band are mixing genres. The closing track 'Elliot Finn' is a rousing finale instrumental, led by bagpipes. A very good closing track leaving you wanting much more.

If you like Scottish contemporary folk/rock, you can't go wrong with Hò-rò. This young group are one of shining stars of this particular scene and have a lot to offer in the future.