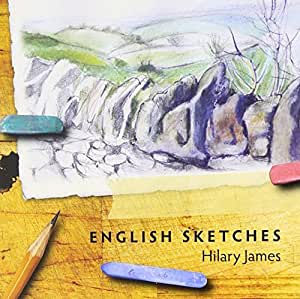 
Originally Released in 2011, 'English Sketches' is the recorded culmination of a project which evolved from a series of concerts at the Museum Of English Rural Life in Reading. In a collection of folk songs and poetry settings, subtitled 'a celebration of English landscape, weather and seasons through traditional song and new settings of poems', Hilary James offers a history of English Rural Life which, geographically, encompasses the breadth of the country from Hadrian's Wall to Land's End.

With words from illustrious writers such as John Gay, Thomas Hardy, A E Housman and Shakespeare, all music on the release was either composed, or arranged, by Hilary and her long-time partner and fellow member of Mandolinquents, Simon Mayor, who also provides accompaniment on mandolin, guitar and fiddle, as well as backing vocals. Other guest musicians are Nick Cooper-cello, Phil Fentimen - double bass, Paul Hutchinson - accordion, David Pether - pipe organ, Simon Price - drums, Ed Quick - backing vocals and Paul Sartin - oboe.

The influence on the recording of Sabine Baring-Gould, a late-Victorian collector of traditional song, is clear. Having collected a dance tune called 'The Mallard', in Devon, with a short refrain celebrating duck meat, he subsequently wrote some new words of his own and renamed the song 'A Country Dance'. On this recording this is presented in a medley with Simon Major's A Jig for Good Measure, indeed 'A Song & Jig For Good Measure' appears on the CD in three different iterations. Baring-Gould's collecting in Devon and Cornwall resulted in the publication of 120 pieces in his 'Songs Of The West' collection. This has served as the source for two more tracks, the jauntily, upbeat 'The Bell Ringing Song' and the warming tale of 'The Lady And The Prentice', which features glorious oboe from Paul Sartin.

The topic of love is covered with a fine rendition of 'The Bold Fisherman', which has a delightful sylvan charm, alongside 'Can Love Be Controlled By Advice' taken from The Beggar's Opera, written by John Gay in 1728, with its hypnotic strings.

All is not rural bucolic bliss, however. 'The Two Ravens', also known as 'The Twa' Corbies', sees a quick detour over the border for a version of one of the most gruesome of ballads in which two birds discuss the pros and cons of feasting on a newly slain knight. Set to a new tune, for some, the upbeat cheerfulness may detract from the subject matter, a claim that cannot be levelled at another song from the same part of the world 'Young Benjie'. This macabre tale of love, rejection, murder and a rising corpse intent on revenge is presented with melancholic perfection. Similarly, the initially optimistic words of 'Bredon Hill', a setting of the poem by A E Housman, develop, over the last three stanzas, to deliver a dark ending, reflected perfectly in the change of tone of both the vocal delivery and musical accompaniment.

In addition to an elegant version of 'Beneath The Willow Tree', with its dreamy cello, there is a sequence of settings of English poems which sees words from Thomas Hardy describing the changing seasons and their effects in 'Weathers', and the engaging 'Winter' and 'Spring', both from Shakespeare's 'Love's Labour's Lost'.

Notwithstanding the brief foray north, English Sketches is indeed an alluring evocation of a pastoral England. Hilary's voice is surely one of the most appealing and attractive around, complemented to perfection by both the quality and execution of the musical arrangements and accompaniments.

This is a seductive listening experience, enriched by Hilary's own, exquisite illustrations

Laughing At The Moon