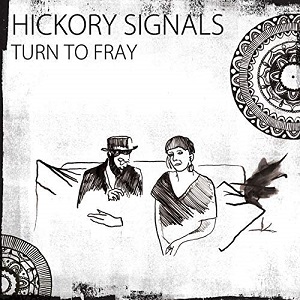 
Hickory signals are Brighton based husband and wife duo, striking vocalist and flautist Laura Ward and deft multi-instrumentalist Adam Ronchetti (acoustic and electric guitar, banjo, drums, percussion and Shruti box). Almost unfathomably, 'Turn to Fray' is their debut album - hard to believe as the album feels so established, unique, well-formed and crafted it's as if they've been here for ever. Not that there is anything pedestrian about their sound- they manage to balance an authenticity steeped in folk tradition, alongside contemporary writing, arrangement and delivery, and the result is a solid bedrock of presence that they two can safely spring board from. It gives them a rare depth that is rich, robust, beautiful and very welcome.

Their performance catalogue pre-release is also impressive- as part of the Bird in the Belly Folk collective they headlined the English Folk Dance and Song Society's national showcase of new talent in 2015, made their debut at Cambridge Folk Festival 2018, supported Rod Clements, Sam Lee, and the fabulous Stick in the Wheel, amongst others. It's clear that the pair have been working hard to establish their presence and sound and that this graft has more than paid off. Collaborations on the album are also well felt - mixed by Ian Carter (Stick in the Wheel) and produced by Tom Pryor, also on violin, acoustic guitar and electric bass. Scott Smith (banjo and slide guitar) Phil Ward (double and electric bass) Amy Squirrell (cello) and Deborah Stacey (backing vocals) all add their magic to stunning arrangements which are balanced, panoramic, poised and thoughtfully conceived.

The theme of the album is songs of 'unravelling'- an evocative and emotive thread that engages one to listen that bit deeper. Alongside musicianship both Laura and Adam have worked in various humanitarian and caring support roles- from the fields of women, children and families affected by substance misuse, to refugee support and teaching adults with learning difficulties. Perhaps it is their footing in the 'real world' that can be heard woven throughout the fabric of the album. There is a gravity and depth here - both in the material and delivery - which alongside being compelling, makes for darn good writing, plain and simple. They have circumnavigated themes such as displacement, mental health and 'nature in flux- unravelling and frayed round the edges' gracefully, without a smidge of triteness, and with respect and sensitivity. The album comprises of seven striking original tracks, with the remaining three being arrangements of traditional tracks including Frankie Armstrong's anthemic 'Door to my Mind'.

The album starts with the tale of 'Rosemary', a song written about poet Rosemary Tonks and based on the last interview before she died, her poetry and obituary. It paints a bleak but resurrected image of a soul in torment, lost in the swathes of her spiritual flux, finding solace in nature and latterly the New Testament. It's a beautifully well-crafted and arranged piece that takes your hand and leads you walking along side Rosemary with its elegant writing and poetic refrain; 'Criminal, very softly, you'll be damned'.

The kinetic ticking movement of 'Two Girls' builds with an assured flute melody based on Ralph Vaughan William's 'My Bonny Boy'. It's a hypnotic, rhythmic piece, with perhaps a nod to Jethro Tull in its vibe. An original song based on the 'chance encounter along the road', it's light and intriguing, with the sort of open ended questions you'd expect from such a theme.

Panoramic, swirling soundscape accompanies further flute refrains in the gentle wash of 'Noise of Waters'. Based on James Joyce's poem of the same name, its arrangement is again emotively delivered with customary presence and grounding. Customary that is to Hickory Signals, who weave their tales of unravelling together into an album that sits beautifully in its authenticity and thought provoking lyrical content. An album to be enjoyed and explored, 'Turn to Fray' is a real treat.