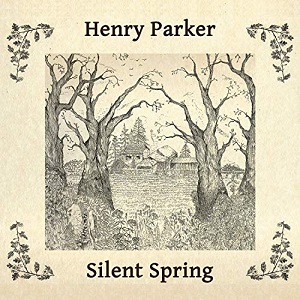 
I saw Henry Parker supporting Lau at the Trades Club in Hebden Bridge about 18 months ago. I was struck by three things: his precision guitar playing; his effortless use of loop pedals; and his youth. I've played guitar for a very long time, but will almost certainly never achieve his standard. The wonderful thing about music is that you draw inspiration from new artists and old, male and female, established and independent. It is especially nice to see an unsigned, young folk musician playing to such a high level, and with the added pressure of being on stage before Lau! Parker's playing style takes you back to the days of Grossman, Jansch, Renbourn, Harper, Thompson, Martyn and so many others whose work has been an essential part of my music education, my music life.

So it won't surprise you that I came away from that gig with his live CD, eagerly anticipating his first recorded work and here it is. "Silent Spring" provides us with ten progressive folk songs with a touch of psychedelia. It is beautifully produced by David Crickmore (who has produced for Steve Tilston and Peter Coe) who also plays on the album. Augustin Bousefield accompanied Parker on double bass for the Hebden gig and this continues into the album, with Brendan Bache on drums and percussion, and Theo Travis (Soft Machine, Gong, Porcupine Tree) on flute. Whetted your appetite yet?

"New Mantras" Surprised me because it started at a pace I didn't expect. Having followed Henry Parker's output on YouTube I was lulled into expecting something more folk than progressive rock, but this song has more than a touch of Jethro Tull, with Travis's flute enhancing the thought. This song grabs and holds your attention for the title track to follow.

"Silent Spring" will remain a favourite. It's languid percussion sitting behind Parker's carefully constructed guitar melody provides the perfect backdrop for the way in which Parker phrases his lyrics. Nothing is rushed about this song, and the introduction of electric guitar toward the end of the song is seamless.

"False Guidance" very much shows the influence Bert Jansch. This is guitar playing at its best, and Parker's voice like Jansch before him is at times almost incidental. "Sylvie" is one of two traditional songs on the album, and this interpretation is delivered with the same unique and engaging style.

"Door Walk Blues" is jazzy, it's folky, it's progressive, and it's wonderfully bluesy, and both this and "Drive East" were the songs from the live show that hooked me into wanting to listen to more of Henry Parker's music. His live songs being a fixture in my car for several months afterwards. Sometimes you can be disappointed with a recorded track following a live performance, but what you hear with Henry Parker is what you get. The recording on this album at least matches the quality of the live delivery.

There is a real quality of musicianship coming out of West Yorkshire these days. Just as this young, Bingley based musician produces driving acoustic rhythms, so too does he provide us with moments of instrumental peace and contemplation, and "Marbled Wren" is such an instrumental, which I have the feeling is a live delivery, or a recording of such quality it feels live. "Days In a Dream" takes those of who are of an age to remember the folk output of the mid-1970s right back in time. Parker's music is not derivative, but his music influences are clear.

"Prospect of Wealth" returns to the blues-jazz theme, with Travis' flute again prominent backing John Martyn-style, crisp, acoustic guitar. This is very much an acoustic album, but Parker is not afraid to blend in a more progressive feel, nor should he be. This album is a fine piece of work.

The second of the album's traditional songs is also its final track. "Willie O Winsbury" has been played for time immemorial by the best artists the folk scene has blessed us with over many years. It feels fitting that someone just starting out should end their debut album showing that he can at least match some of the song's previous renditions.

I've always been of the opinion that musicians schooled in heavy rock and metal end up making fine acoustic guitarists, and while Henry Parker falls into that category he also has something extra special. When a musician delivers as effortlessly as this, you know he is going to be around for a very long time.