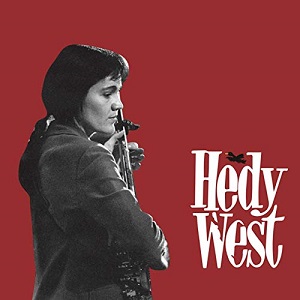 
The influential folk revival singer Hedy West tragically died in July 2005 at age 67. Almost exactly a year ago, Fledg’ling released From Granmaw And Me, Hedy’s last completed “special project” and final legacy, which was voted a Top 10 historical release in last year’s fRoots Critics’ Poll. Now, in partnership with the Estate of Hedy West, the same label releases another of Hedy’s previously unreleased albums. Recordings for the informatively-titled Untitled (ouch!) – under a holding title of German Album II – took place in 1979 in Germany, her latterly-adopted country of residence, the year before she moved back to America. Like her previous record (Whores/Love, Hell And Biscuits, released in 1976), Untitled also featured spirited contributions from Eloise Schwarz and New Lost City Ramblers stalwart Tracy Schwarz.

Peggy Seeger has termed Hedy a unique singer who “sang straight, and always had new songs that you’d never heard but always wanted to hear again and again”. That description applies big-time to Untitled’s unashamedly eclectic ragbag of songs, more determinedly wide-ranging than the old-time-dominated From Granmaw And Me. Hedy’s commanding voice is in full rein here, whatever the type of song she tackles, and each and every rendition is characterised (as ever) by a vital, intense individuality. Traditional balladry is represented by versions of Young Edmund, The Plains Of Waterloo and Queen Jane – and although none exceed four minutes in length, we never feel shortchanged, either in impact or textual completeness. The Plains Of Waterloo, by the way, is a striking and unusual variant on the battle narrative, told from the humanistic viewpoint of a foot-soldier; Hedy had already recorded it (along with a slightly shorter version of Young Edmund) for a projected Topic album of Matching Ballads whose release was sadly aborted (I wonder if Fledg’ling could get the rights to exhume this lost album?).

Born In North Carolina is a four-line fragment of obscure old-time origin, and the country-gospel contingent is represented by the inclusion of I’ll Sing A Song (from William Billings’ anthology) and the uncommonly rousing emancipation hymn There’ll be No Distinction (from Blind Alfred Reed). There’s also a Malvina Reynolds song (On The Rim Of the World), and two more familiar American folk staples, Hobo’s Lullaby and Civil War opus Bushwhacker. Tucked in the midst of these, we find a pair of real curiosities. The Three Friends is described by Hedy herself as “a homiletic (sic) tale dressed as an animal fantasy, written by a philosophical fruit farmer in Cheshire, England named Leslie Haworth; he rewrote it from a German folktale”. Der Graben (The Trench), in complete contrast, which Hedy describes as coming “from between WWI and WWII”, was written in 1926, one of many satirical outpourings by the German man-of-letters Kurt Tucholsky under one of his several pseudonyms Theobald Tiger. (This choice was one manifestation of Hedy’s fascination with the confusion of the German “conundrum” which she had hoped to be able to clear by moving to Germany…)

Listening to Untitled, it’s easy to hear why she’s proved so influential, to Martin Simpson in particular but also to many other contemporary folk musicians. Untitled proves another fascinating entry in the Hedy West canon, and is highly recommended, not just to folk revival enthusiasts.