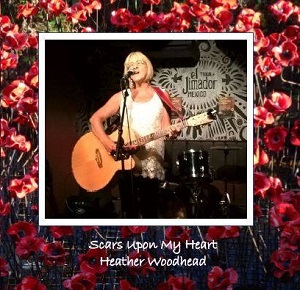 
Heather’s a Leeds-based singer who accompanies herself deftly and precisely on guitar. She is noted for her distinctive, pure, ethereally beautiful voice and clear diction, and her thoughtful and refreshingly unassuming interpretations of traditional song in particular have won her many admirers over the past decade. And yet, although Heather’s a regular face on the local gig scene, she’s not managed to make many recordings, and she’s only released three CDs so far to my knowledge.

Over the past two or three years, Heather’s principal musical activity has been concentrated on her Scars Upon My Heart project, which adopted its title from that of a book serendipitously discovered in summer 2014 in a charity shop (as one does!): an anthology of poetry and verse from the time of the First World War written by female poets from the woman’s point of view. Heather was duly inspired to set a number of these poems to music. Her settings formed an integral part of a special concert-recital (also taking in extracts from letters written by soldiers to and from their loved ones), which Heather (with the help of flautist Alison Battye) took to several West Yorkshire venues, and across to Brussels, during the 18 months leading up to the centenary of the end of WW1.

Here at long last is a recording of just a few (sadly, too few) of Heather’s settings (“if I had had more time and money I would have recorded them all”, she says). It’s necessarily something of an appetite-whetting exercise therefore, presenting six of her settings in home-studio recordings produced (sympathetically and very capably indeed, too) by her son Tom. Heather cheerfully and candidly admits that “in terms of conventional music writing I have probably broken many rules” – but so what when the results are as beguiling and spellbinding as this. For here, it would seem, Heather has found her métier, so to speak, in that these texts clearly speak to her and so she proves the ideal conduit for their poignant reflections. The poet’s emotional vulnerability also speaks with an underlying confidence of expression and delivery, and Heather’s musical temperament is well matched to this.

Especially persuasive to my mind are the three settings of poems by Vera Brittain, which might be viewed as forming a miniature song-cycle for the first half of the disc. Perhaps, dedicated to Vera’s fiancé Roland Aubrey Leighton who was killed in the war at age 20, is the centrepiece, her grief brought into sharp focus by the bare solo performance, her discomfort accentuated by the noise of the guitar action. The first track, To My Brother, sets the poem Vera wrote for her younger brother Edward four days before his death in June 1918; Heather’s voice rises eerily out of a cocoon of electronica and treated guitar sounds, giving a sense of temporal dislocation in what might be thought the poet’s premonition. The third poem, The Only Son, is a less personal rumination, though its prevailing aura of sadness and horror is no less plangent for all that.

The Vera Brittain sequence is followed by two settings of verses by Sara Teasdale, an American poet whose frail and sickly character (and acute response to nature) is well captured in Heather’s settings of the desolate lines penned by a fragile, on-the-edge lady (she was to commit suicide in 1933), which on Mayday even include passages of ethereal whistling. The final setting on the disc is of a three-line poem by May Herschel-Clarke (otherwise famous for her anti-war poem The Mother); Nothing To Report is almost matter-of-fact in its dismissive finality but as an epilogue to the other five settings comes as something of a masterstroke.

There’s much to appreciate in Heather’s music, not least her almost unearthly expression of the poet’s innermost thoughts. Her interpretations possess a crispness, a precision in the inner detail that’s hypnotic, conjuring a tangible atmosphere of temporal displacement, a response that’s of time yet outside time and a universal presence that transcends the personal. I do hope Heather manages to record more of her settings in the future. In the meantime, she is doing us all a considerable service by making us, through her musical talent, more aware of the wealth – and quality – of First World War poetry written by women. The design of the whole package is very attractive too, and texts are usefully printed in the accompanying booklet.