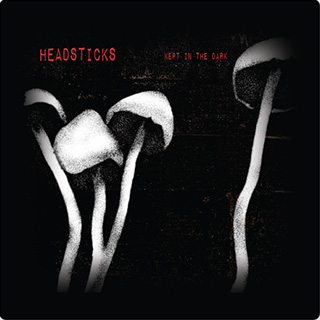 
Incendiary guitar, driving drums, thudding bass and wailing vocals, "When" opens Punk/Folk/Rockers Headsticks third album in five years. In truth it's a raucous rant and rage about life in our current climes along the lines that fans of the Staffordshire band have come to love and expect.

Sixteen tracks, just four minutes short of an hour and as much musical variety as found on those old vinyl K-Tel "Super Hits" records of the Seventies that crammed as many tracks as possible on to a single LP. In STP records hands "Kept In The Dark" is also available on vinyl in a Double Gatefold Splatter edition that sparkles.

For those who have followed Headsticks since day one there's a return to the folk tinged first album (Muster) with "It's a Matter Of Time" which includes a middle eight section written by Mark Bailey, The Trent Vale Poet who sadly succumbed to cancer last year and to whom this release is partly dedicated.

The band combine elements of ska ("I Love You"), Punk in "Peace Or War" and rock in "Smoke And Mirrors". There's even spoken prose as Andrew Tranter opines that Compassion is "Out of Fashion" in a field recording by a busy road.

Nick Bayes fine double bass lines finally get a deserved lift in the mix with the rockabilly tinged "Mr. I'm Alright Jack", it follows a similar theme of not offering a helping hand up from those standing on the high moral ground. It's also the lead single and the video below is great fun.

Humour raises it's head, "Kept In The Dark" has giggles reminiscent of Bowie's Laughing Gnome before delivering the expected message that we are all mushrooms and fed….

"What If They're Right", questions our beliefs and allows Stephen Dunn to cut loose on the electric guitar ably supported by the rhythm section of Bayes and Tom Carter on drums.

"All Of The Trees" sees the band heading into acoustic Joni Mitchell territory as familiar targets, the State, Religion and Richness are all remorselessly hit.

Fellow bands and the "have fun and party festival" crowds come under the spotlight in the uptempo "The Song For Songs Sake". Ironically it's possibly the most catchy tune on the album.

For an album of messages delivered in a simple striped back manner that represents Punk at its best the last track is a real surprise.

"Baboon Shepherd" an eleven minute outpouring of consciousness. An epic that takes us back to Andrew Tranter's teenage years growing up. Ostensively a story about a South African footballer, it wanders and meanders offering opinions about everything from being a Staffordshire paper boy on a annual trip to Blackpool, to Hillsborough, to views on Apartheid. It wraps up and revisits the themes expressed throughout the album whilst the band just jam away in the background.

It's a perfect end.

Headsticks, "Kept In The Dark", don't be.