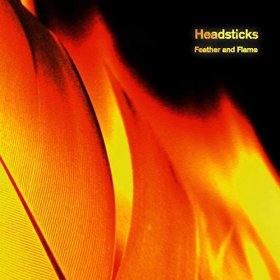 
Another chance to get an earful of Headsticks' brand of punked up indie new wave rock and roll. A bit of a folk and roots crossover with attitude and heaven forbid, even a bit of passionately charged fist pumping thrown in for good measure. They're back with a second album to gird the loins and lift the spirits. Their debut EP and first album 'Muster' both gathered some decent feedback and with their natural exhuberance transferring perfectly to the live environment, festivals a speciality, 'Feather And Flame' is another step in validating that reputation.

The studio polish dulls down the vibrant enthusiasm and intensity which you can sense is going to come into its own in the live environment and inevitable festival shows. There's social comment aplenty which is going to lead to the predictable comparison which sees Headstocks taking up the baton and flying the flag previously flown so fervently by the likes of The Levellers back in the day.

'Feather And Flame' sees them delivering all their own work - 'Go Move Shift' finds itself fired/inspired by Ewan MacColl's 'The Moving On Song' and not dissimilar to a high energy and raw 'Subterranean Homesick Blues' style delivery. All lo fi unspoilt electric guitar and a prominent vocal in the mix which is typical of the production qualities of the whole album. Immediate and honest - you get the impression that the modern fangled studio magic which comes in the form of auto tuning and digital trickery, have been ceremoniously ignored in the name of capturing a band playing their songs live and with passion and vitality.

'What Do We Want' kicks off the album and sees the revolution on hold while everyday life and soap operas take priority. The reality of industrial decline and the general struggles and strife of everyday life are common themes. Alongside the holy trinity of guitar /bass/drums, it's what they've termed their own brand of musical insubordination and are pretty much pleasing themselves and doing things on their own terms. Terms which fans may find is solidly rooted in 1976 - a new wave sound with a punk message where the attitude relies on the importance of carrying their message rather than coat it with a gloss of musical excellence - what's the need when you have enough with a few chords played with enthusiasm and ire to match. At the back end of the record is 'The Falling Out Of Love Song', a stark closing number lamenting the politically correct world in which we live taken to extremes, very likely putting into song the sentiment and words that many people are thinking but can't speak. Which is the beauty of what Headsticks represent - the chance to air their beliefs in an unrestricted musical context.

You're Killing Me America (Live)