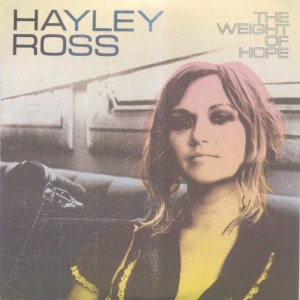 
An emergent new name on the folk scene, Ross hails from Walton-on-Thames but can can currently be found in Brighton where's she renovating a fishing trawler for her Newhaven home. In-between scraping off barnacles, over the past four years she put together this debut album, an album on which she plays everything from guitar to cigar box and musical saw while assorted musicians weigh in with drums, cello, piano, sitar and French horn.

Mixed by Stone Roses legend John Leckie, it covers a wide musical spectrum, at the one end the double-bass backed slow way lullaby of 'Tumbledown' and the soft undulating shuffle 'Barracuda' and at the other the Spector Wall of Sound influenced pulsating ballad 'Come Back'.

Opening with 'Dernier Baiser' with its cello, horns and field recordings, and part sung in French it draws on such influences as Nina Simone, Billie Holiday, Nico and Kim Deal, the latter evident on the rumbling desertscape sound 'Moving All Around'. By contrast, she explores a more minimalist palette with the spooky death-themed 'Big Black Car', while, accompanied on piano and featuring the sound of wine glasses, 'Lay Me Down' turns to old American hymnal colours, 'Jangled' is fingerpicked jazzy folk blues and the ambient 'Kids Again' turns on the vocal distortion switch with Ross playing stylophone, bass and monotron.

As such the tonal and stylistic shifts mean you have to sometimes work at listening to it, but when the end result offers things like the languidly lovely, guitarette-backed folk blues 'Go Slow', the simple Tracy Chapman-influenced voice and guitar 'Fierce Love' and the slow waltz , brushed drums closer ''Spartan Heart the rewards are immense.