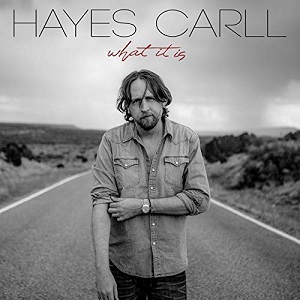 
Texan born Hayes Carll is something of a quiet American institution and over the past decade has been recognised as not just a ‘songwriter’s songwriter’, but someone who also happens to be a remarkable performer in his own right. He has won multiple Americana Music Awards, topped the Americana radio charts, received a Grammy nomination and had his songs recorded by the likes of Lee Ann Womack, Kenny Chesney, Kelly Willis and Hard Working Americans.

Following on from 2016’s ‘Lovers and Leavers’, the 12 songs on ‘What It Is’ feature his trademark wit, wry observation and pointed social commentary. The release also showcases co-writes with Metraca Berg, Adam Landry, Lolo, Charlie Mars and Alison Moorer, who is also credited as co-producer with Brad Jones who himself produced two of Hayes earlier albums. Unfortunately, the review copy and accompanying promotional material does not list the musicians that play on the album, but without exception the performances are excellent.

Track one, ‘None’ya’, as in ‘none of your business’, demonstrates all of the above and more. Led in on acoustic guitar and rootsy fiddle, Hayes richly lived in voice tells us the affectionate vignette of a long term relationship where the endearing just about navigates the right side of infuriating.

Should that make the listener a little too fuzzy, ‘Times Like These’ rattles in like Status Quo covering Chuck Berry and is a joyous piece of modern country bar room rock, whilst ‘Things You Don't Wanna Know’ has Hayes weary vocal supported by some marvellous band playing that enters just at the point where the track feels like it’s about to fall over. Brilliant song this one.

These opening three numbers set a high bar that is not only maintained with ease and but exceed several times throughout the album. Hayes has a very flexible voice that somehow combines the laconic delivery of late, greats Guy Clark or Townes Van Zandt with the timbre of a less strident Steve Earle, and while the label of ‘songwriters songwriter’ might be something of a poison chalice in less assured hands, he carries the mantle admirably. Personally, I want to enjoy a song before I admire how it is written and this is always the case here, unselfconsciously song before the songwriting.

‘If I May Be So Bold’ is raucous, almost rockabilly ensemble playing that rattles through on tight drums and slick guitar fills whereas ‘Jesus and Elvis’ is another observational mini drama, every bit as stately as the title suggests and featuring some particularly fine Salvation Army sounding Brass towards the end of the song.

For me, other standouts are the last three tracks on the album. ‘Fragile Man’ is a lyrically raw take on the place of modern man in contemporary society and is simply glorious in structure, form and delivery. Hayes really lets his voice stretch out as the song builds and instead of the usual country fiddle sound, the strings here are orchestrated with the lushness of the score from a James Bond movie. This is simply a spellbinding song and my only complaint is its criminally short length of well under three minutes.

‘Wild Pointy Finger’ is a musically sleazy, gleefully sardonic take on the ease at which we can blame others in order to preserve our rather safe sense of self, which leads us unsuspectingly into the heart breaking simplicity of album closer ‘ I Will Stay’.

‘What It Is’ really is a great record from Hayes Carll, and a great record by anyone's standards. The songs are very strong indeed, the production values faultless and the performances from all involved, endlessly tight and creative.

It’s still only early January 2019 but I can see this one being around for the end of year awards – a fine piece of work indeed.