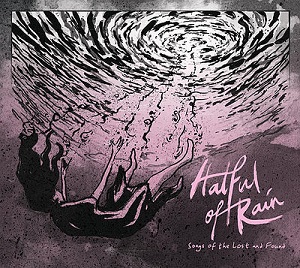 
Hatful of Rain are Brighton based roots quartet, who draw on American, English and Celtic influences. Their songs are fuelled by contemporary themes such as austerity, migration, loss and redemption, and described as responses to a modern world. They show themselves to have firm standing in both tradition and progression, blending old time bluegrass, Appalachian and country inspired tacks with poignant ballads, country blues and folk tales. They have developed a sole use microphone approach to their live sets and have a reputation for creating intimate engaging atmospheres in their performance. Seemingly very intimate- their harmonies are sometimes four parts, implying they all get on quite well too.

The band's first album, after forming in 2011, 'Way up the Hill' was keenly received, leading to a session on whispering Bob Harris' prestigious BBC2 show. The subsequent second album 'The Morning Key' led to various nominations and awards - including a nomination to play at the Americana music awards in Nashville. So, there's an expectation that album three will be darn good, and for me, it more than rises to the challenge.

The opening track 'Start Again' is compelling, well penned, well-crafted and sets the tone of an album that is intriguing and rich throughout. It's obvious that there's no weak link in the musicianship chain in the group - solid tracks with strong hooks and arrangements. The close harmonies are seamless and on the money, the instrumental breaks well timed and beautifully delivered. They have a gift for writing that draws you into the narrative and keeps you there with them - I found the album compelling and the stories engaging.

Perhaps it'd be good however to have a little bit of back story on some of the songs - the subject matter of each feels important, at times quite specifically so, and although the themes and metaphors are often are clear, I'm left wondering about some of the detail. No bad thing, to keep a listener guessing, but perhaps, as the themes feel to be so passionate and central, a little is lost there for me.

One of the interesting things about 'Songs of Lost and Found' is how the tracks change dependant on the lead vocalist. I like the variation in this approach as it lends itself to a varied format and texture. Although the writing styles are quite clearly marked, with some more natural leads than others, all are complementary to each other and to the overall feel of the album

The musicianship throughout is a real treat, these guys can really play! I love the openness and easy looseness of the instrumental pieces on the album, the kind you only get when musicians know and love their instruments and what they're doing with them. 'Gathering Wood' is a real ramble, starting with the atmospheric lilting fiddle melody that sets a scene of a good old 'Cold Mountain' country vista, building with flawless mandolin and banjo parts alongside stunning fiddle playing. It's rare to hear original compositions that carry forwards old time sentiment from a contemporary stance, something Hatful of Rain do extraordinarily well. The other instrumental piece on the album - 'Won't be Druv' is a right mover, alive and lively, inspired by what Google tells me is the unofficial county of Sussex motto, meaning 'we won't be driven'. A gloriously irreverent dissonance, to which there could be no better expression I recon than a good stomp to this tune.

There's a wonderfully easy, almost 'poppy' country feel to songs such as 'Sinking like a Stone', a Nashville worthy, coming-of-age ballad about being far from home and out of your depth. The band manage to be light and easy listening without triteness or compromise on the genuine sentiment. Likewise, with 'But for you'- mournful and ripe with loss, longing and regret.

'Where There's Life' has a kind of skippy vibe that somehow doesn't belittle the gravity of the subjects it carries; speaking of hope in the face of despair, domestic abuse and thankless optimism. With themes such as these, there's an earnest intent from Hatful of Rain to convey states of humanity, lost and found parts of ourselves and our environment which can only be commendable, alongside the ability to rock it when the time's right. Nice work.