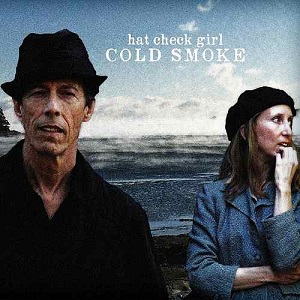 
The seventh duo album by Peter Gallway and Annie Gallop, here joined by fiddler Deirdre Wood Becher, this has a conceptual leaning in as much as the shared songs are either based around historical backdrops or accounts of actual events.

As such it opens with Gallway's 'Enola Gay, a song which relates his father's story of being posted to an island in the South Pacific during the war in the Pacific where, assigned to the Army Air Corps Quartermaster, he recalled three B-29s landing in a hush hush operation, one of which was named Enola Gay. The next morning it had gone, set off on its mission to drop "the ten thousand suns." Given a suitably moody and sparse acoustic setting with guitar and double bass, spoken more than sung, it addresses how the world changed and "nothing was the same for us ever again, for my sons or this world", referencing the duck and cover nuclear alert that would follow for years to come.

Taking the other Gallway tracks, the equally sparse 'Nor'easter' pivots round another war, the narrator, back home in the cold winds of Maine, recalling how, during his second hundred days tour of duty in Iraq, his mother died, his best friend was killed and "I found myself a God I could do business with", essentially a song about having faith "When you can't see your hand in front of your face."

A third conflict informs 'Andersonville', titled for the notorious Confederate PoW prison in Sumter County, Georgia, during the American Civil War, where over 10,000 Union prisoners died from dysentery and starvation. Accompanied by raw mandolin, it's sung in the voice of Newell Burch of the New York Volunteers, who spent 21 months there after being captured at Gettysburg and whose secret diary was subsequently published, the chorus noting that "those who arrived eleven stone left as skin and bone if they left at all…God saw the worst in most of us in the place called Andersonville" and "the cowards who walked among our own" that preyed on the weak.

Featuring Gallop on harmonies, he describes the lyrically poetic 'Cold Smoke Road' as inspired by passing a road sign while driving through a mill town outside of Missoula, Montana and imagining a character who's "been around the block more times I can count" reading John Le Carre and thinking back on his betrayal of love with repentance and regret, quoting Tony Bennett in the Amy Winehouse documentary that "life teaches you how to live it. If only you live long enough."

Real life rears its head again with the dolorous 'Highway of Tears' and its haunted skeletal banjo. The title refers to Highway 61 in Canada, which earned its nickname on account of the fact that, between 1969 and 2006, at least thirteen women, mostly indigenous, were murdered and five went missing along the 450 mile stretch of road between Prince George and Prince Rupert. It's sung in the voice of one of the tribal elders, the grandfather of Micheline Pare, one of the missing, bitterly complaining how the authorities in Ottawa have done little to solve them.

She has two war connected songs of her own, the first the dreamy, soft and quiveringly sung 'Cobalt Blue', about a pilot coming home "untouched, to his easel and his brush", painting memories of the skies, and having an adulterous affair with his married model that inevitably ends in tears ("he was not ever going to leave his wife"). She, in turn, takes her pain and anger out on her family (it seems to be sung in the voice of her daughter) and ending with the resonant line "I can't tell the difference between war and love."

The other is the heartbreaking Liza Blue, Gallop sounding a little like Buffy Sainte-Marie as she adopts the persona of a woman thinking back to when she was three and her titular beloved dog was called up to serve in the Canine Corps during WWII, never to come home.

Not a true story, but sounding like one, a particular stand out is'Songbird of Cincinnati', which unfolds the story of an African-American woman who 'could pass' and becomes a singing star but falls fouls of the Jim Crow and Miscegenation laws of the Southern states , given away by her illegitimate daughter's dark skin, and gives up fame, chaning her name and slipping away into obscurity to raise her child.

Another highlights, Gallop's factual historical contribution comes with 'Thirteen Cents An Hour', its deceptively jaunty Irish-flavoured arrangement telling the true story of the Triangle Shirtwaist Factory Fire in 1911 New York when embers from a cigarette set fire to the Asch Building in Greenwich Village, leading to the death of 146 garment workers, of which 123 were women, mostly Italian or Jewish immigrants aged 14 to 23,many, as with the song's young Irish narrator and her mother, leaping to their death from the burning building.

Featuring fiddle and acoustic bass, and vocally evoking the McGarrigles, 'I Broke The Law' is sung in the voice of an eco activist variously protesting deforestation, nuclear weapons, whaling, human rights abuse, the farming of silver foxes and statues honouring Confederate figures, ironically only getting busted when she finally attracted media attention and, thereby, became a problem.

The album ends with two duets. On the first, the bluesy and moody 'Letters', they trade verses on between a soldier serving in Vietnam and his wife/girlfriend protesting the war back home, while the closing (and I suspect autobiographically informed by their recent move to Maine) track, 'Sycamore Lake,' is a sketch of a couple sharing their lives in partnership, patience, and kindness, at one with their environment, their neighbours and themselves. "Count yourself blessed", they sing. A copy of this album will go a long way to ensuring that.