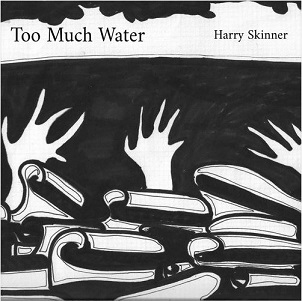 
Free to download in these pestilent times, or at least until he can begin gigging again, Harry Skinner's second solo album is a graceful amalgam of the last I-don't-know-how-many years slinging a guitar for the benefit of his and other people's songs. His name may be familiar to blues watchers from his three decades (and counting) with far-feted New Wave of British Blues outfit The Producers and the acclaimed duo he gigs with that band's bassist Dave Saunders. More recently his guitar has brought depth and breadth to the Anglo-Americana beat group tangles of south coast combo Dumb Poets.

It's a rich history and it all plays into these solo meanderings, from the folk-country banjo skips and restrained slide guitar that drive Rich Man Poor Man Beggar Man Thief to the crafted picking and chord changes that speak of jazz as much as proggy-folk on Summer's Gone. The playing is matched perfectly by a time-soaked vocal performance that more than makes up for its untrained rasps with bags of feel tempered and finessed on a thousand nights on a thousand stages. The enchanting Follow the Dog gamely mines the blues root still further although it's A Meditation on Blind Willie Johnson that really takes the biscuit. The clue's in the title of course, but it's the treatise of a devotee and more than enough to urge further exploration if you've not yet had the pleasure.

And perhaps that's the greatest surprise of this charming record - with its expressive hints of Tom Waits, Dylan, maybe even Levon Helm, Skinner's voice is warm, rich, captivating and open to the song as much as the lyric. Dearest Friend could be the lament of the year for a lost connection; while the opening Bamako is a folkie campfire anthem for the summer we might yet be robbed of; and the instrumental Firefly alters perception with some spectacularly tricky guitar.

The album closes with the reflective, heartfelt title track that delivers a strong hook and robust chorus in spite of its apparently fragile guitar-only setting; and The Sunday Drive, a wind-in-the-hair instrumental demonstration of the fine art of knowing exactly when enough is enough.

Too Much Water is ample reward for taking a detour from your planned path online in these lockdown months. Recommended.