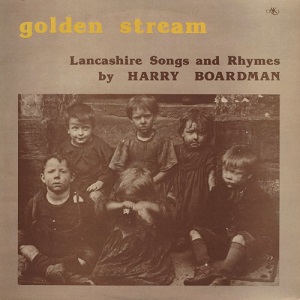 
Harry Boardman, who died in 1987, was a living legend in the north-west, but barely a name to many outside of the region. A native of Failsworth near Oldham, he developed a passion for researching and performing the songs and dialect poems and folklore of industrial Lancashire, all the while encouraging others to do the same. He brought this material to a wide audience in the late 1950s, largely through performance in a folk club (the first of its kind, indeed) which he and his wife Lesley founded in 1954 in Manchester, then in 1964 he was invited to record six tracks for Topic Records for their LP New Voices, a proud showcase for debut recordings by northern singers (Harry himself, The Watersons from Yorkshire, and Maureen Craik of Birtley). Three years later, Harry was instrumental in the production of the iconic LP Deep Lancashire, a comparable showcase for several of the performers whom he had encouraged at his folk club; the LP was so successful it spawned a ready sequel, Owdham Edge. Harry himself appeared on just four further records (three for Topic - 1971's Trans Pennine, his celebrated 1973 solo album A Lancashire Mon, and 1975 double-LP The Bonny Pit Laddie - and the Broadside label's 1977 Steam Ballads collection, to which he contributed a pair of tracks). A surprising paucity of recordings, then, especially considering Harry's strong musical personality, his charismatic, unaffected and clearly very enthusiastic - nay, positively ambassadorial - delivery (and he was no mean practitioner of the anglo concertina and banjo).

What turned out to be Harry's final record, Golden Stream (named after the River Irwell's course through Salford, you understand!) was an inspired collaboration with independent recording engineer Keith Twort of AK Records during 1977 and 1978. It was something of a family affair, for it featured contributions from his wife Lesley and son Tim, while other musicians and friends (Bob Diehl, Bob Morton, Steve Turner and Chris Cole) were also involved, variously playing fiddle, guitar, mandolin, banjo and melodeon, and there was even a spot of clog-dancing on one selection. In addition to the marvellously spirited and solidly accompanied renditions of the songs, which include such gems as Ashton Mashers, Frolicksome Kate, The Cotton Lords Of Preston and I Mean To Get Jolly Well Drunk, we're treated to three unpretentious instrumental tracks: lively dance tunes from Lancashire-originated collections (including some 3/2 hornpipes) which are simply bliss and great fun. The album also contains three unaccompanied items: the Harry Whitehead classic Hard Times, a medley of kids' rhymes, and a prescient (if somewhat unimaginatively titled) Folk Song 73, Harry's setting of an Al Potts poem on a decidedly contemporary theme. And a keenly-observed recitation of the Harvey Kershaw dialect poem Drawin' T' Rents.

This magnificent Epona reissue has been made possible with the kind permission and cooperation of Keith and Lesley, and, importantly, through the diligence and persistence of one of the finest of today's Lancashire folk performer, Mark Dowding (who has himself kept Harry's memory alive, firstly with similarly charismatic recordings of songs associated with Harry and secondly in the researching of Harry's other activities such as TV and radio broadcasts). Mark has donated to this CD its two invaluable bonus tracks - one song and one recitation - which he recorded live at a folk club in January 1983. Although both items were central to Harry's repertoire, neither had ever appeared on any of Harry's LPs; here, the song (that immortal and delectable ditty Cowd Stringy Pie) is prefaced by some chatty insights into the Golden Stream LP. All nigh irresistible.

Although the original LP was given a limited-run cassette reissue in the late-1980s as a tribute to Harry, it has never appeared on CD until now, so enjoys considerable status as a genuinely sought-after artefact whose artistic and cultural value undoubtedly matches its rarity value. And Epona's timely reissue more than makes up for the 30-year temporal lag, for it's beautifully presented, with excellent sound (from a master taken from the original quarter-inch tapes) and sporting artwork that carefully preserves the ambience of the original LP sleeve; the jewel case contains a handsome booklet complete with song notes and glossary and photographs as well as performer credits. Reet champion!