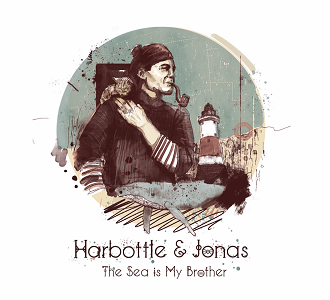 
Trawling through their back catalogue, songs of a nautical nature appear as an undercurrent, Faithful Sailor Boy on We Shall Overcome, Carry On You Fishermen & Spanish Ladies, (Cutthorpe Hill) and My Boy Jack & The North Sea Ground from Anna Is A Dancer, to name but a few. It comes as no surprise then to see that Devon-based Harbottle & Jonas's latest release The Sea is My Brother is a maritime-themed album in which 'seascapes meet soundscapes'.

Recorded in Cornwall at Cube Recordings, husband and wife duo David Harbottle, vocals, acoustic guitar & banjo and Freya Jonas, vocals, harmonium & concertina, follow up their acclaimed 2017 album Anna Is A Dancer, and a very successful January 2019 tour of Germany, with 11 tracks, nine of which are self-penned, to deliver a diverse mix of nautical narrative songs, referencing sea tragedy, coastal towns or ports and heroism, which are delivered in a most assured and impressive manner.

The opening track, their interpretation of Mike Silvers's arrangement of Ewen Carruthers's Was it You, which imagines the final minutes of Captain Scott's life in 1912's Antarctica and the realisation that the race to the Pole has been lost, is a touching song featuring harmonies which have a liquid quality underscored by sympathetic instrumentation.

Heroism appears as a key thread in two songs. The mournful drone of Freya's harmonium is a perfect way to introduce Fr. Thomas Byles, David's moving eulogy to a man who forwent the opportunity to board a lifeboat on the Titanic in order to absolve passengers of their sins. A more positive outcome, however, occurs in his A Lady Awake. This is the tale of 22 year old Grace Darling and her rowing out in a coble with her father, from their lighthouse, to rescue survivors from the wreck of the paddle steamer SS Forfarshire who were clinging to the Big Harcar Rock, in September 1838. Notwithstanding the artistic licence that the lyrics take with factual accuracy, this track demonstrates the symbiotic partnership of the duo and in a fine accolade to a brave woman.

The often dark and unforgiving power and nature of the sea is further explored on several tracks. Lost to the Sea is a slow, melancholic tribute to the 23 Chinese cockle pickers who lost their lives on Morecambe Bay Sands in 2004. A powerful song indeed, showcasing the duo's song-writing and musical talent.

'Forgotten footprints swept into the tide
Shadows looming on the bay'

Ninth track, Headscarf Revolutionaries, the title taken from Dr Brian W Lavery's book of the same name, is a tribute to Lillian Bilocca who campaigned for, and won, better safety measures within the deep-sea fishing industry, following the Hull Triple-Trawler Disaster, and fits appropriately alongside recent similar releases by Reg Meuross and Joe Solo.

There is contrast in tenor on the release, however, with the breezy Liverpool City, the city where the duo first met, a song of two young lovers and The Saucy Sailor Boy, which originally appeared on Dawn Breaks, being re-recorded and given new lease of life, with the original recorder and violin being replaced by upbeat brass and drums which are very much to the fore.

This expansive sound is well-evidenced on both Hall Sands, which tells the demise the village of Old Hallsands on the south Devon coast in 1917, following the dredging of the beach for gravel, where the words by John Masefield & John Galsworthy are set to a delightfully catchy and percussive tune, and also on the only instrumental on the release, Elizabeth Prettlejohn. This jaunty tune was inspired by the eponymous last resident, who refused to leave, living there until her death. A Pathé Newsreel showing Elizabeth can be seen here

The album's title track, The Sea is My Brother, takes its name from Jack Kerouac's 'lost' autobiographical novel written in 1942 but unpublished until 2011. Written by Freya, this tale of a man tied to the sea features not only her lucid voice, but also pleasant harmonies and, once more, strings which build to a heady climax over the harmonium

Saved Alone, the final cut on the album, is the harrowing story of Anna Safford, who lost her four daughters in a shipwreck when sailing from America to Europe on the SS Ville du Havre when it collided with the Scottish clipper Loch Earn in 1873, with a loss of 226 lives. One of only 61 passengers to survive, she sent, from Cardiff, what has become a famous enigmatic telegram to her husband, Horatio 'Survived alone. What shall I do...' He immediately left Chicago and, during the Atlantic crossing, as he passed the area of the disaster, was inspired to compose the hymn 'It Is Well with My Soul', words which feature in this poignant song. From Freya's initial, plaintive, vocals, the song builds and swells with a beautiful string arrangement to deliver a memorable ending to the disc.

On this latest release the duo show their true colours. The Sea is My Brother is another absorbing chapter in the Harbottle & Jonas story. Reflective, diverting and ultimately enjoyable, get on board with this distinctive duo.

The Sea Is My Brother