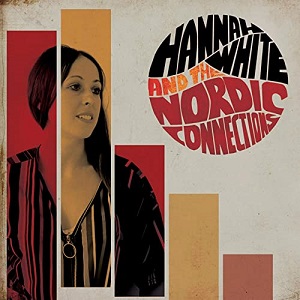 
I've had a curious interest for a while in why Scandinavia has been such a good market for 'Americana' music. During my research I read a Biilboard article last December that highlighted how UK and US artists are "fuelling the Norwegian Americana scene", and the lead photo was of Hannah White and the Nordic Connections, so I've been keenly looking forward to its release (5th June).

What really appealed to me is that this album is recorded live in a bread factory in Bergen, Norway with the absence of digital, so you when you listen to this album you get music by musicians on top of their game. Its quality hits you from the first pedal steel guitar note of the opening song "Never Get Along". Hannah White has a truly transatlantic voice, equally at home on either side of the pond, and the mastery of this album is that British and Scandinavian musicians have created something that would be perfectly at home in Nashville. As live recordings go, this is right up there with the best of them.

"Never Get Along" is a mid-paced, beautifully constructed love song that sets the scene for the rest of this highly personal work. The blend of instruments is the perfect complement to White's breathtaking voice. "Start Again" continues the theme, and you really get the 'live' feel in its recording, with some terrific textural backing vocals and a seamless key change, before "City Beats" introduces a west coast fused sound with echoes of Lowell George and Little Feat, a real foot tapper.

The slower mood of "Pay Me a Compliment", the album's next single, lends itself to Gundersen's pedal steel guitar which seems to wrap itself around the lyrics and give them that extra depth of emotion. In contrast, "Gotta Work Harder" is a country rocker with some terrific guitar licks throughout, leading to an unexpected but sensational, and original solo to carry the song into its bouncing final verse.

"My Father" is quite beautiful. It depicts the life of White's own father. It's tragedy is not just in his passing, but in the fact that there was no money with which to give him the send off that everyone of us would want to give a loving father. The publicity for this album talks of their rarely being a dry eye in the house when this song is delivered live. Never mind live, I was close. When a beautiful voice sings of sadness, it seems to enhance the emotion.

"Like We've Always Done" is a gentle paced, anthemic country rock song that is delivered so slickly you would swear this is a normal studio recording. This song, this album, while focusing on the very personal nature of White's songs and her life journey, is also a triumph of musicianship. "When You're Not Around" is a reflective bluesy number with a Beatle-esque chord structure. We all question ourselves when an important relationship ends "Can I be proud of the person I am when you're not around". We all know the answer to that too, but loss can lead us to some dark places.

"The Darkness" is my personal favourite song on the album, with White's vocal playing off the Hammond during the intro lulling the listener into expecting something ethereal, and then the blues beat kicks in. It is a cleverly structured song and demonstrates the full range of her voice: the restraint, the range, the softness, the clarity, the levels, all appropriately placed in delivering this masterpiece of a song.

The acoustic guitar introduction to "Man Without Men" takes the listener back to the essence of this singer songwriter of growing reputation. This final song is a love song packed with emotion, rawness, familiar meaning, and it is delivered quite beautifully from beginning to end - I was really surprised to learn after listening that the song exceeds 6 minutes. It bears a repeat play.

The sound of Hannah White's project with The Nordic Connection is from Nashville via Norway to Tooting, where she runs The Sound Lounge with Rosanda McGrath. It would be remiss of me here to not give the venue a plug for when we are finally out of lockdown. The Sound Lounge is a creative hub for performance, exhibitions, workshops and a space for community groups to come together: "Art for All".

Hannah White and the Nordic Connections