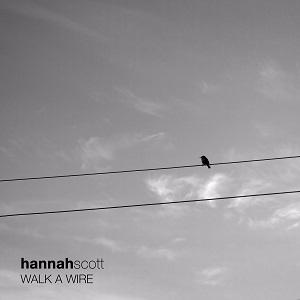 
Can it really be almost a year since Hannah Scott released her extremely well-received album, "Pieces of the Night", reviewed here in FATEA? Since then, much of a positive nature has happened in the furtherance and development of her musical career, including Hannah signing a publishing deal with Chelsea Music, and having opened prestigious shows for Madeleine Peyroux, as well as touring in Europe and across the UK.

The news that a new single, (actually as two versions, see below), is about to be presented will be greeted with enthusiasm and excitement in many quarters, and "Walk A Wire" will not certainly disappoint.

Co -written and produced with long-standing musical partner Stefano Della Casa, the song is inspired by a friend with a disability who closed herself away for fear of rejection. Lyrically, however, the song is also one of hope and optimism, inviting people to grasp the nettle and seize life's opportunities.

"Walk A Wire" perfectly marries Hannah's tender, passionate vocals and consummate song-writing skills with Stefano's stylish synth-rich production values. Not merely content with employing techniques which were nascent on the aforementioned album, sonic boundaries continue to be pushed and extended, resulting in a three-minute masterpiece.

The song is beautifully constructed, ebbing and flowing in terms of volume, power and intensity, which, (in my interpretation), mirrors in a musical form the contrast between the passiveness of the friend and the more active approach advocated by Hannah herself. Thus the opening, almost whispered, vocal, with sparse keyboard chords accompany

'You chose your road
You walk it like a ghost'

leading to the introduction of strings and a hint of percussion which introduce the chorus, with a change of register in Hannah's voice

'Walk A Wire
When you're afraid to be something'

before, at 49 seconds in, building to a hard-hitting percussive rhythm, before returning, once more to the sparser sound, after a mere further 10 seconds. The song then continues in the same vein, with repeated similar, but not identical, patterns, and a thoroughly uplifting experience it is too.

A feature of Hannah's recorded output thus far is the refreshing nature of her willingness to experiment. Thus, this release will certainly have a wider potential appeal than just the 'acoustic folk' fraternity (to unashamedly apportion a label). "Walk A Wire" is an excellent single, take time to listen and absorb, you will be well-rewarded.

I alluded above to a second version of the song. Indeed there is also an 'acoustic' version which has much more laid-back percussion and keyboards and swaps the electronic elements for guitars. This is also a highly recommended listen, and might well appeal to those suffering from synthesiser aversion. The best advice would be get both versions.