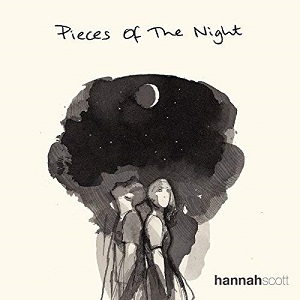 
Hannah Scott - an interpreter of emotions per eccellenza

Sometimes, one can be disappointed with a release, having built up expectations based upon having experienced songs being played live prior to their recording. On other occasions the opposite can happen, with the final production values on the recorded output far exceeding any presuppositions, however good the live performances.

Hannah Scott's latest CD, Pieces Of The Night falls squarely into the latter category, it is a corker of an album which leaves this reviewer feeling 'brighter than the sun at noonday'.

Co-written with musical partner Stefano Della Casa, this latest, much anticipated, recording sees their fruitful musical journey continuing on its upward trajectory with a collection of honest songs about the human condition and human connection in an increasingly hectic world.

Drawing on their own experiences, the songs are inspired by family, friendship and celebrating differences between us, lyrically exploring the need to have optimism and resilience in the face of adversity, whilst also encouraging and stimulating self-belief.

Opening cut, Pieces Of The Night, sets the scene perfectly, showcasing Hannah's arresting vocals against a stylish electronica background. A song extolling the virtues of being a bit different from everyone else, this is a cut that initially was not even slated for inclusion, but was 'promoted' twice, once to be included but then a second time to become the title track. Good decision.

In the modern world where the noise of social media is very much to the fore, Weight Of Your Words carries a reassuringly positive affirmation - we must not forget that each of us has a message to share and that even if sometimes we feel that we have nothing to say, everyone does.

Third track, Hearth Of My Home, which lyrically encourages one to stay true to yourself when others around you suggest otherwise, is another cracking song and features a great violin solo from Oleksandr Bozhyi. A change of tempo follows as Dust & Doubt begins with Hannah's haunting vocals and a simple piano introduction, before developing into a brooding examination of self-doubt. This song apparently had a long gestation period, but with powerful lyrics such as

it was well worth the wait.

The second half of the CD begins with No Gravity, another haunting offering, at times, (compliment intended), reminiscent of Drive by The Cars (yes, the one used extensively in Live Aid videos). A track which reflects upon those serendipitous moments when a place or person you come into contact with is followed by everything just falling into perfect place, it is soon, (Friday, 6th July), to have an official video release. This is a magnificent song and on most albums would be the stand-out track.

This release, however, is awash with superb compositions, and next song, Signs Of Life, a song about finding hope in the darkest of moments, is another epic number, with Hannah's soaring vocals, together with quite outstanding instrumental backing, arrangement and production, taking the listener on a 2 minute 44 second aural journey to paradise.

Penultimate track, This Is Not An Ending, is a beautiful offering, possibly the best song that Suzanne Vega never wrote, with optimism again shining through in the lyrics

The poignant and sparse delivery of the final track on the CD, Boy In The Frame, which was written for Hannah's nonagenarian grandmother, who at the age of ten lost her brother, who was 17 at the time, in a car accident, is at once sweet, melodic and rich, and exemplifies perfectly the range of the writing on the release.

Hannah Scott is as fine an interpreter of emotions as anyone on the contemporary folk music scene today.

Pieces Of The Night warrants serious investigation - it one of the best releases of 2018.