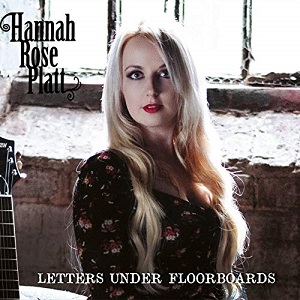 
Hannah Rose Platt's critically acclaimed debut success, Portraits, was received with such overwhelmingly positive and effusive warmth that it is possible that one feared that any subsequent release would struggle to match its sheer quality. Such fears are unfounded. Letters Under Floorboards, the eagerly awaited and highly anticipated follow-up, featuring 11 tracks of original material, manages to surpass the beauty of the first, displaying an on-going maturity that belies Hannah's relative inexperience.

Clearly a great deal of thought goes into every element of her releases. For example, just as Portraits was a perfect title for her debut, capturing, as it did 12 mini work-of-art vignettes, so Letters Under The Floorboards, (a line from the 'Your Way' track), is the ideal imagery to entice the listener to delve into songs which perhaps initially hide and then ultimately reveal, in parallel to the way that the aforemetioned eponymous letters often do.

In contrast to the debut CD, which was recorded in Nashville, where she worked with some of the industry's leading names, Letters Under Floorboards is much more of a UK affair. Co-produced with AMAUK Musician of the Year Thomas Collison, who also provides an array of instrumental contributions, other illustrious guests include Joe Bennett, (Goldrush, The Dreaming Spires, Bennett Wilson Poole) strings & trumpets, Henry Senior (Danny & The Champions of The World), pedal steel and F.Scott Kenny (The Dreaming Spires, Society, Bennett Wilson Poole) drums. Thus, to these ears, this sophomore release benefits from an overall sound which is much fuller, richer and expansive than on the debut.

Additional guest vocals come from Danny George Wilson (Grand Drive, Danny & The Champions of The World , Bennett Wilson Poole), along with alt-country pioneer Sid Griffin, which maybe comes as no surprise given his previous endorsement of Hannah as "a young, north of England Emmylou Harris blossoming before our eyes and ears". With mixing undertaken by Jay Stapley (Roger Waters, Mike Oldfield) and audio consultancy provided by the mercurial Tony Poole, such a veritable cornucopia of talent and experience lays testament to the esteem in which Hannah is held by her peers.

From the emphatically glorious opening bars of first track 'Illuminate', to those closing the album on final song, 'To Love', it is clear that Letters Under Floorboards is a work of masterly delight. Eight of the tracks appearing here are sole Hannah compositions, with the remaining three being co-writes with her stepfather Christopher Stevens, and each one is a gem in its own right. The listener is treated to a collection which confirm Hannah's gift for creating both songs which exhibit storytelling of the highest calibre together with those which are founded upon more salient and arresting narratives of a more personal, first-hand nature.

The former, comprising tales of both imagination and poignancy in which vivid characters are brought to life, envelop the listener in the drama of their lives with skilful acuity. 'Chanel & Cigarettes' is a haunting song featuring a conceited adulterer, receiving his come-uppance, (if I interpret the closing line correctly as being somewhat sinister). With the fading hope contained in the fragments of letters of an immigrant Irish worker to his lover back home in 'Brooklyn, New York', and the description of a hurricane affecting the southern US, Cameron, Louisiana in particular, in 'When Audrey Came To Call', which might just also be a metaphor describing a turbulent relationship, each one of these exquisitely crafted offerings resemble a short story set to music.

And then, in a similarly authentic vein, the harrowing duet with Sid Griffin on 'I'll Tell You When', one of the co-writes, recounting the innocent daughter who, as she questions her pioneer farmer father, is blissfully unaware of the unfolding devastation, revealed as they step outside, (no spoiler here, check out yourself and prepare to be moved), and the equally enigmatic 'Josephine', a beautifully delivered paean to Josephine Baker, and a fitting reminder of hard-won freedoms that are seemingly under attack, indeed often being eroded, in our contemporary world.

The strength of Hannah's writing is no less evident in the more 'personal' offerings. Never maudlin nor seeking approval or self-pity, songs relating to problematic relationships, including those of a potentially, or indeed real, harmful nature, appear to have been written from experience, as Hannah states in the sleeve notes "This album was very painful to create at times". 'Sculptor', 'Your Way' and 'To Love You' pull no punches, whilst what I assume is a break-up song, 'Checkmate', will resonate with those who have stumbled down this path. However, and it is a big however, despite the suffering, remorse and anguish these are, ultimately, songs with messages of optimism, be they of resilience, aspiration, hope or perception.

Hannah is in possession of a captivating voice, which is empowered to shine throughout the album. The accompanying musicianship, in tandem with her considered choice of words in the lyrics, is judged to perfection, neither too much nor too little, just spot on. Plaudits to all involved in production/engineering etc.

Letters Under Floorboards is an outstanding album from a remarkably assured talent whose upward direction of travel should be confidently guaranteed with its release.