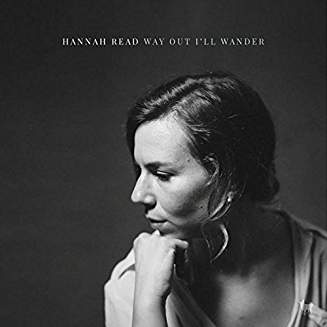 
Hannah Read is a Scottish singer now based in Brooklyn, New York. She spent her youth playing fiddle and singing in the rich traditional music scene in Edinburgh and on the Isle of Eigg off Scotland's west coast. She's travelled around attending music colleges in Edinburgh, Paris and Boston, USA. Here she gathered around herself the tools, vocabulary and experience for the thriving Brooklyn music scene. "Way Out I'll Wander" is her second solo album. Also a collaboration for Songs of Separation with Eliza Carthy and Karine Polwart won a BBC award for the best Folk Album 2017.

"Moorland Bare" The mountain dew frost has settled on the bare moorland when the skimming rain arrives and the brook starts flooding, the wind plays a tune as a new moon passes over. The bleak and wild landscape is portrayed well in this song, it is an unforgiving place then the curlew sings and the rain drops settle in your hair. The guitar and the vocal harmony offer an unmissable opportunity to feel the atmosphere out there on the wild unbroken moor.

"Ringleader" This is an appraisal of one who would lead a band of follows compelled for some reason to accompany the apparently uncaring soul. In the words of the refrain, he draws the weak and pulls them under. It is not an edifying prospect and the delicate arrangement seems at odds with the message, but I suppose that is exactly how the gullible are drawn to one who would lead them astray.

"Alexander" A city in turmoil, the calming voice of one drinking and smelling of nicotine is remembered. He taught two people how to love again. but in the bombed out city he was left behind. The droning bass being bowed behind a sadly picked acoustic guitar sets the tale of someone who dreamt of a Shangri-La in a distant land but he never made it out. Hannah's breathy vocal adds poignancy to this sorrowful tale.

"She Took A Gamble" A precarious cottage with less than perfect facilities on a remote beach is the setting for this song. It hinges around (we presume) a mother who took her children to this outlying place to live. It was cold, often wet and inhospitable with long dark nights in the winter. But in the summer the beach was there to be enjoyed with tiny creatures hiding under the sand from the clawing tide. When the weather turned we would huddle together for warmth. The piece has elements of reminiscences which could indeed be from Hanna's own childhood in the Isles of the Hebrides. It is, in it's own way a tribute to the bravery of the woman concerned. The electric guitar is mellow in the lead Hannah's clear voice telling the tale in a convincing manner.

"Way Out I'll Wander" The snow is blowing around in the wind, just the sort of day he would have enjoyed, dancing in the free air, out in the country. He is sadly no longer with us, but his memories remain. Many times we visit the place, it reminds us. The fiddle leads us into a sedate dance before the thoughtful and emotion filled lyrics fill the air to relate the tale until the voice almost alone except for tones of the harmonium the completes the story.

"Boots" This is love song where the woman will tolerate his clothes on the floor for a few more hours in bed. She lays there admiring his red locks and strong cheekbones. She wants him, but must keep a little of herself as her own. She issues an open invitation to her bed whenever she's in town. The vocal is delivered in a plaintiff way that leads the listener to imagine that she is surprised by her own passion.

"Campsea Ashe" A memory of a catastrophic first attempt at driving along the driveway to the old house. A house in which many memories are embedded in the walls. A life in which things get harder, but we can still enjoy that which we had before as time runs away with us. A nostalgic recalling of life as it was.

Looking back on what I have written above makes this album sound downbeat. Certainly there are moments of sadness, but also pictures of wild nature at its best, together with recollections of things and lovers past. A couple of instances of passion and indeed comic relief (the car ends up in the field for example) bring me to the feeling that this is a charming CD. It is released on 23rd February 2018. Hannah is touring the UK with solo launch gigs in Edinburgh, Leeds and London.

She Took A Gamble