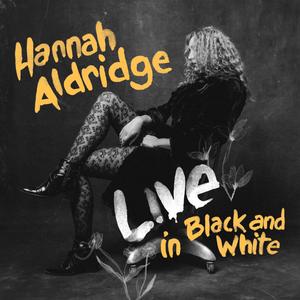 
What it says, this is Muscle Shoals-born Aldridge recorded live on a set of songs drawn from her two studio albums, Razor Wire and Goldrush and two otherwise unreleased songs. Recorded across two venues, the Lexington in London and Tangled String in Alabama, it features both solo performances and collaborations with English, Welsh and American guests.

It opens in gutsy solo bluesy form with 'Howlin Bones' from the first album before the first of her guests puts in an appearance in the form of her Hall of Fame songwriter father Walt on guitar for the emotionally raw waltz 'Lie Like You Love Me', again off Razor Wire. Wigan's Robbie Cavanagh joins her for harmonies and guitar on the stupendous self-examining title track of the second album from which also comes a fiercely strummed solo rendition of the urgent and defiant 'Aftermath'.

Stripped to the bare acoustic bones, 'Black and White' was written as an autobiographical letter for her then five-year-old son and about memories and time passing, then it's the turn of The Black Feathers to take to the stage for 'Save Yourself' off her debut album.

Only ever previously available on a hard to find demo, the restless spirit 'Rails To Ride' is a jaunty country number, possibly one of the few songs to mention Jesus and cocaine in the same line, for which she's fluidly backed by Welsh trio The Goat Roper Rodeo Band who also served as her backing on the recent UK tour.

Always a showstopper, the six-minute 'Lace' is what Aldridge describes as her demon possession and lust song , a slow burning ballad that sports the line "I like my whisky how I I like my men" with a teasing pause before she adds "right on the tip of my tongue." Here she's joined by the last of the album's guest, Bradford's rising Americana star Danni Nicolls on harmonies.

A song inspired by a programme she saw about a woman who was on death row for killing her abusive husband, 'Parchman' is named for the Mississippi prison and takes some listening to sit through without feeling both choked up and a sense of cruel injustice.

Not yet available as a studio recording, she set closes with another bluesy number, 'Born To Be Broken', a song inspired by and about Hannah, an African-American slave who worked on the Hermitage plantation of Andrew Jackson, the 7th president of the USA, and was also his secret mistress. Regarded as an Aunt Jemima (the female equivalent of an Uncle Tom), she was disowned by her family and her grave lies some way apart from theirs.

The first encore comes with 'Lonesome', a bittersweet song from Razor Wire, the set topped off with her now classic crowd rouser finale 'Burning Down Birmingham', a song inspired by being vomited over following a gig in Alabama, on which she's joined by, presumably, as is usually the case, audience members for the oohing harmonies and title refrain finale.

Having seen her live on several occasions, both on her and with a band, I can testify to the electricity she generates and which this album fully captures.

Larry Get Out Of The Bin