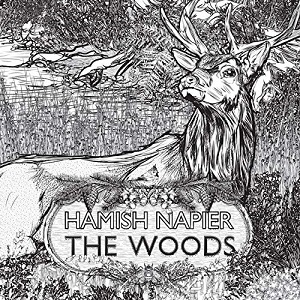 
The Woods, which both explores and celebrates the ancient forests of his native Scottish Highland home, is the third solo album to be released by folk musician, composer and tutor Hamish Napier, following on from his 2016 debut, The River, and 2018's The Railway. This CD sees him continuing his ambitious Strathspey Pentalogy journey, which, when completed over the decade set aside for the project, will have seen five albums of newly composed music inspired by the landscape and people of Strathspey, each one representing one of the Classical elements, earth, fire, wind, water and aether.

Commissioned by Cairngorms Collect, helpfully described in the release notes as 'a partnership of neighbouring land managers, committed to a bold and ambitious 200-year vision to enhance habitats, species and ecological processes across a vast area within the Cairngorms National Park', The Woods is truly a folk tune cycle of immense beauty, successfully melding together the music, folklore, native languages and natural environment of the area.

In addition to Hamish's own multi-instrumental talents, which here include whistles, wooden flutes, pianos, harmonium, Rhodes and Wurly, we are also treated to musical contributions from a raft of the top names from the contemporary folk world, including Ross Ainslie, Steve Byrnes, Jariath Henderson, James Lindsay, Calum MacCrimmon and Innes Watson, together with Scottish Chamber Orchestra cellist Su-a Lee. The album is superbly recorded, mixed and mastered by Andrea Gobbi, who also shares co-production credits with Hamish, the sonic effect, both within my humble abode and 'in the forest', (see later), creating many a frisson of aural pleasure.

The Woods is truly epic in scale, in several respects. Primarily, its 21 tracks, comprising 28 new tunes or pieces, run for fully 66 minutes, and such is the quality and enjoyment as a listening experience that not a single second of this appears extraneous, indeed there was disappointment here when the final track came to a close. Add to this already overflowing cup a triple gatefold CD sleeve featuring stunning art-work courtesy of Somhairle Macdonald and a detailed 28 page booklet, and the scale of this epic-ness, (© D. Trump), becomes apparent.

What, one might legitimately ask, could possibly fill 28 pages, especially as there are no lyrics? The answer, to some extent, partly lies in the fact that in order to fully explore and appreciate the woodland and its connection to both the past and present, Napier has written a track for every letter of the Scottish Gaelic tree alphabet, itself a relation of the Ogham alphabet, which was traditionally taught to children in schools, with reference to native trees and shrubs. For those knowledgeable folk who are aware that this alphabet only has 18 letters, and are thus puzzling as to the maths, there are two trees for each of the letters G, R and U and five tracks for other forest flora and fauna. Extensive descriptions of facts and uses for each of the 20 or so native trees, alongside several fascinating photographs and some explanations of the tunes and instrumentation further add to the content of this 6 000 word booklet, and if that were not enough, the reader is directed to even more via Hamish's website.

Premiered at Celtic Connections, The Woods truly succeeds in bringing the forest to life aurally; I don't recall too many albums giving vocal credits to woodpecker, swifts, chaffinches, woodpigeon and crested tits, the Rivers Spey and Druie, the aspen tree, not forgetting Loch ice waves and 2-man cross-cut saw, the roaring stags and sparring capercaillies.

The music itself is as varied as the landscape and its inhabitants. All 26 of the tunes find their origins within the Scottish folk tune tradition, albeit given contemporary uplifts through clever arrangements and the auxiliary field recordings. Thus the album moves between differing moods as tempos change, one moment a regal slow air, the next jigs and reels, and along the way the odd march.

The entrancing hour or so that follows gets off to a memorable start with opening track, The Pioneer, a beautifully captivating slow air for the Beith, or birch, in which bamboo flute, fiddle and uilleann pipes interweave delicate melodic filaments over sympathetic bass and drums. This contrasts well with the much more up-tempo beats of the track which follows. The Capercaillie Rant/An Taghan fairly rips along, as firstly the titular capercaillie, and then its arch-enemy, the pine marten, (An Taghan) are celebrated.

This 'pairing' device is used to great effect several times over the course of the album, for example on Mycorrhiza/Tree of Life, where the symbiotic relationship between trees and funghi is reflected in an equally rewarding mutual exchange between the melody and accompaniment, and Hawthorn River/The Witches' Tree, a pair of tunes which emerge from the evocative sound of the flowing River Spey to represent the hawthorn, the May Tree, and blackthorn, the tree from which witches are said to produce their wands and staffs.

Whilst more cheerful, upbeat tunes include Foragers, recalling the "Wee Beasties" of the forest, the pair of tunes that pay homage to the alder and aspen The Shield Tree/The Trembling Tree, respectively, along with the jaunty polka of Venus In The Woods, variety is ensured with the inclusion of slower offerings, such as Tree of Knowledge, Tree of Love and the cautionary Wildfire.

The March of The Lumberjills, a brief, but nonetheless absorbing, history of whom is given in the booklet, is a mournful piece which, along with the lament, The Highest Willows, with its poignant Canntaireachd, (chanting), exemplify Hamish's highly-developed compositional capacity, before dawn rises in the pinewoods on the final track, a field recording of male capercaillies displaying for females.

As outlined above, The Woods makes for a fascinating, and thoroughly enjoyable listen, not only indoors, but also when aired in one of my local forests, Ashdown, where it takes on a different, inspirational character. The result of many, many hours of research and work, Hamish can hopefully rest assured that his efforts will not go unnoticed. Although it may be a little premature, this early in March, The Woods is such an accomplished offering that it will surely feature as a candidate for instrumental album of the year.