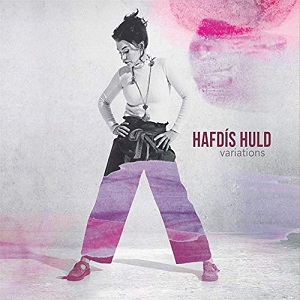 
Just because you can, doesn't mean you should… Conversely, sometimes it's good to be bad. Isn't it?

Hafdís Huld is from Iceland so gets to suffer comparisons to another wilful daughter of that chilly island on a regular basis. While she's no doubt long been reconciled to that fact, I wonder if exercises such as this help in the quest to establish her own identity.

Taking other people's songs - some very well known others less so - and placing them in another setting is a tried and tested career move with something of a patchy track record. For every bold new interpretation there's a cover version that adds nothing to the original and many others that fall way short of the known version. Does it show a lock of ideas, or a surfeit? Is it an act of arrogance, or homage? Are they any good or not?

Usually it's a mixed bag and so it proves to be here. Huld's gently robust take on Dolly Parton's The Bargain Store makes for a promising opening gambit, but when it gives way to Whitney's One Moment In Time the suggestion is that the road ahead could be a bumpy one. Tackling Mike Chapman's The Best - here mis-titled Simply the Best - is frankly daft for no matter how eagerly Huld casts off the original's bombast and pompous posturing, the tune remains instantly recognisable. No amount of fragile vocalising and muted instrumentation can alter the melody.

The same is true of a version of I Want To Break Free that will always seem surplus to requirements.

It gets better on a take of Here Comes the Rain Again that plumbs the dark depths of the Eurythmics hit, but far, far more successful is a gentle retooling of Ewan McColl's timeless The First Time Ever I Saw Your Face, in which Huld applies tiny but telling tweaks to Roberta Flack's definitive treatment. It's a beautiful moment. The Divine Comedy's Strings of Love - the theme tune to Father Ted in case you think you've heard it before - benefits from an equally light touch.

It turns out that what The Real Thing's disco classic You To Me Are Everything has been crying out for all these years is a banjo and more proof, should any have been needed, that folk and disco have a larger overlap than some might imagine can be found on Barry White's lurve anthem You're the First, the Last, My Everything.

Boo Hewerdine's Slow Learner is deftly re-cast in a female perspective and makes for a genuine variation, but the cover of Loudon Wainwright's The Swimming Song that closes out the record does little more than revisit the simple setting of the original. Mercifully.