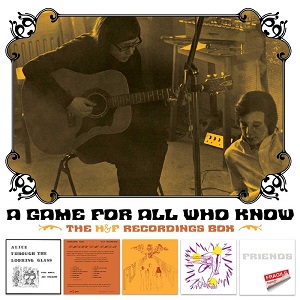 
Between 1968 and 1974, Peter Howell and John Ferdinando, two amateur songwriters, musicians and home-taping enthusiasts, retreated to their makeshift home studio in East Sussex to mastermind a series of four privately-issued albums that were attributed to semi-fictitious groups such as Ithaca and Agincourt, all under the aegis of H&F Recordings. Those albums are now amongst the most valuable vinyl artefacts of the era, so this comprehensive and definitive new five-disc box-set is immensely valuable in gathering together all four albums plus an unreleased-at-the-time fifth issue (The Friends’ LP Fragile) which was abandoned at acetate stage in 1974 after Howell joined the BBC Radiophonic Workshop on a full-time basis. It thus renders all previous reissues of individual albums from the H&F stable redundant

For the brilliantly (knowingly!) titled A Game For All Who Know set, these rare albums are sourced from the original master tapes, and now attractively packaged in card sleeve replicas of the vinyl artwork. The accompanying 24-page booklet contains a fabulous 7000-word essay chronicling the multifarious H&F activities together with useful interview segments and loads of rare photos. So presentation could not be better, and certainly does the music within full justice. Commentary on the music itself, however, must begin with a caveat that, while much of it is extraordinarily charming and at the same time surprisingly accomplished, its nature – often oddball even by “English eccentric” standards – will almost certainly polarise listeners, even those with more than a passing empathy with the period’s more whimsical artistic creations.

The first two LPs arose out of self-contained projects pieced together for a small, self-contained local community, and comprise music and song (and, in the case of the first LP, Alice Through The Looking Glass, speech) of a proudly idiosyncratic nature. The artistic impetus stemmed from the two musicians’ boredom with playing live covers with the band The Four Musketeers, the desire to write their own material and – most of all – the acquisition of a tape recorder, which was quickly established as an instrument of creativity and experimentation. A 1968 approach from The Ditchling Players, a local am-dram group, to provide the musical backdrop for their stage version of Alice was exactly the springboard the guys needed, and the resulting LP presented a uniquely English hybrid of folk and pastoral psychedelia using an array of usual and unusual instruments and “peculiar recording techniques” interspersed with excerpts from the play itself. It’s a very odd, inconsistent experience, both intensely intricately conceived and at times primitively executed, which doesn’t always quite hang together but nevertheless conveys an almost hallucinogenic total experience that’s less drug-fuelled than bucolic. The second LP, Tomorrow Come Someday, took its cue from music produced for a summer-of-’69 “musical comedy” set and filmed in the idyllic, picturesque Sussex village of Lurgashall and concerning the threat to village life from a motorway expansion but done in quite a tongue-in-cheek manner. Though ostensibly of purely local interest, and presumably of intentionally limited appeal, this project nonetheless contained some charming music and quality songwriting.

Peter and John’s third LP was Fly Away, which appeared later in 1970 under the group name Agincourt. It marked a real advance on the earlier LPs in terms of recording quality and expertise and improved studio facilities, and also featured vocals from Lee Menelaus on a set of mostly gentle songs with individual composition credits more or less equally shared between Peter and John. There was a distinctly early-Fairport/Pentangle/pastoral-jangle-folk influence to some of the material, with occasional wild-card entries like the almost Lou-Reed-VU electrified beat of Get Together, the slightly Shadows-inflected moves of instrumentals Joy In The Finding and Barn Owl Blues and the chugging Mirabelle, and the chirpy indie-space-girl vibe of Take Me There. And possibly in pride of place, the album’s prog-pretender finale Through The Eyes Of A Lifetime, which was very Days Of Future Passed/Lost Chord, complete with portentous spoken intro, and was apparently written with tongues firmly in cheek as a fully intentional parody of the Moody Blues brand of pretentiousness… But the album’s songs are of uniformly high quality and there some interestingly ahead-of-the-time production touches. All in all, Fly Away can in retrospect be counted the most consistent, and consistently rewarding, of the H&F albums, with an attractively sensual period atmosphere all its own that in some ways can compare with Trader Horne’s near-contemporaneous Morning Way.

The fourth LP, A Game For All Who Know, was released in 1973 under the group name of Ithaca, and was the ’90s kickstarter for all original collector interest in the music of Peter and John before it was realised (then confirmed) that they were the common factor in all four of the album releases. Ithaca featured the same trio as had recorded Agincourt, but this time all the songs were written by John. It had all the feel of a conscious spiritual-journey concept-album, and has been (perhaps a trifle unkindly) described as a “perfect low-budget imitation” of the Moody Blues of On The Threshold Of A Dream and A Question Of Balance. But to be honest, it feels more like an affectionate pastiche-cum-tribute to the Moodies. It surely qualifies as “gentle, melancholic progressive rock with neo-classical flourishes”, and I could pay it no finer compliment. A little ersatz at times, but none the worse for it, and musicianship and production values are uncommonly high.

At around the same time as Ithaca was being written, work was also started on Fragile, the previously-unreleased fifth album from H&F, which was a collection of stand-alone songs by Peter that he’d been meaning to get down on tape but not quite managed to. Though under the working “group” title of Friends, the album was more akin to a songwriter’s demo album, which showcased Peter’s easy talent for melody and pop sensibility that, had it been encouraged and developed, might have led to something had it not been for the intervention of the offer-of-a-lifetime day-job. At times there was more of a folk-rock feel to the material – Lonely Road crossed early-Fairport with acoustic Stones riffs, and A Tale Of Your Life was definitely influenced by Sandy Denny and Fairport. The collection also had a rather different character to the more prog-overtoned Ithaca, partly due to the introduction of Ruth Cubbin on lead or harmony vocals on several of the tracks, especially characteristic on Come Inside and Once In A Winter Town. Sadly, the Fragile album stalled at acetate stage, and its appearance on the present box constitutes its CD debut – and yes, it’s well worth hearing on any count.

The music on this immensely useful five-disc box will doubtless prove quite a discovery – a real Joy In The Finding, indeed! Not least since it provides a special insight into a hitherto under-documented dusty corner of the early (initially lo-fi) proto-indie DIY aesthetic.

Agincourt - When I Awoke