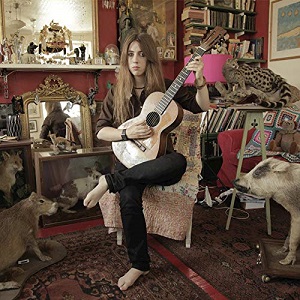 Gwenifer Raymond
Album: You Were Never Much Of A Dancer
Label: Tompkins Square
Tracks: 13
Website: https://www.gweniferraymond.bandcamp.com


I bet you won't know what to expect from this young lady - especially given her debut album's title. Although the fact that she's been signed to premier San Francisco independent label Tompkins Square may give some listeners a useful pointer…

Gwenifer's a young Welsh multi-instrumentalist hailing from Cardiff who now resides in Brighton; she operates here on her debut solo CD in the firmly acoustic sphere, playing both guitar and banjo - and she's both astoundingly proficient and the possessor of an astoundingly musical sensibility. But how did she arrive here? Even more astoundingly, we learn that Gwenifer's formative musical experience was the gift, at around the age of eight, of a cassette of Nirvana's Nevermind album, shortly after the mind-blowing experience of which she demanded to be bought a guitar! Her teenage years were spent playing either guitar or drums in various punk or rock outfits around the Welsh valleys, all the while discovering, via the likes of the Velvets and Dylan, a common heritage-cum-lineage in pre-war delta and country blues and Appalachian music, a combined interest which then led her through guitar tuition to be introduced to the American Primitive genre and in particular the music of John Fahey.

Thus, Gwenifer's own music is both an entirely natural response to, and embracing of, the traditions of American Primitive, country blues and Appalachian music. But she's the real deal too, no slavish copycat tribute-act, for she has the technique to carry it off, paying homage without resorting to empty imitation (as if anyone could!). her compositions are born of genuine inspiration and imagination, taking the acoustic guitar in particular forward from today's informed perspective and building on the experience with considerable flair and intelligence and the benefit of all the "strange mutations" of punk and harder-core rock with which she's been involved along the way.

Thus, her Requiem For John Fahey is an economically expressed homage, rather akin to a Fahey composition pared down and shorn of its occasional longueurs and experimental eccentricities. There's also something of the aura of fellow guitar stylists Michael Chapman, Robbie Basho and Andy Roberts (to name but three), but again their influences are absorbed and assimilated without a trace of pretension. The album also contains a number of other mini-tone-poems that range across an impressive gamut of moods - from the finger-blistering Sometimes There's Blood and the high-speed ragtime of Face Down Strut to the more meditative Laika's Song, the modal adventure Dance Of The Everlasting Faint and the ambling bottleneck-blues Sweep It Up. The two-part Sack 'Em Up takes off from a contemplative prelude that builds into a genial Davy-Graham-esque ramble. The three tracks Gwenifer plays on the banjo also display considerable virtuosity and musicianship, and take us from the folksy Appalachian-styled clawhammer of Idumea to the breathtakingly frenetic yet perfectly controlled Bleeding Finger Blues via the high-octane sanctified Oh, Command Me Lord! Seriously tremendous… And yet the disc's opening track (Off To See The Hangman, Part 1) is a 57-second call-to-prayer played on a solo fiddle, bearing no obvious thematic connection to the cyclic motif of Part 2 which follows seven minutes later yet setting the scene most engagingly.

Gwenifer proves at a stroke her dictum that "you don't really need anything more than one solo instrument to fully express yourself, especially when those feelings and moods refuse to be articulated in words". With such an abundance of killer musicianship built into her slight frame, Gwenifer is nothing short of exceptional, and you owe it to yourself to get hold of her album. (Wonder what else she plays, by the way…) And while you're about it, check out her (digital) Christmas single, a close-on-seven-minute guitar epic entitled The Three Deaths Of Red Spectre, which was originally born of a score she performed live for a screening of an early silent film of that name, and with its sequence of cold and spiky aural imagery effortlessly transcends any potential seasonal ephemerality.